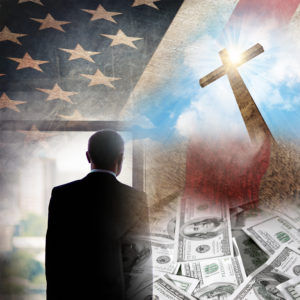 Stan Brewer watched over Ogden’s Dinner Horn Market, as its proprietor.  He also served as a community leader, not unlike Mitt Romney, during his sojourn in Boston, as its Mormon Stake President, and later as the Massachusetts Governor.

Mostly, Buss and his parents loathed Mormon dignitaries, describing them as power-hungry authoritarians.  Brewer and a few others were exceptions, however.  One was a community icon who advanced to become President of the Mormon Church.  In his early years as leader of Ogden’s fledgling Weber State University, David McKay defied an exclusionary Mormon practice and traded with George Sawyer, an outsider.  McKay’s actions were remarkable, then.  George was a non-Mormon from Texas who ran a butcher shop out of a converted coal shed.

Always though, it was Stan Brewer who stood atop George and Nora’s “good guy” list.  So what explained Brewer’s magic?  What made him unique in that time and place?

Truth be told, there was no magic to Stan Brewer.  He was a “real” person; someone both pliable and also a respecter of those he encountered.  Indeed, what drew George and Nora to Brewer was his avoidance of the pseudo-realities driving many of his orthodox Mormon contemporaries.  Stan Brewer was a man for all seasons.

So, a question percolates up from my paternal grandparents’ struggles, as they made their way as strangers in what for them was a very strange land.  What could it mean now, to function as a Mitt Romney or a David McKay or a Stan Brewer, way back then?  In a contemporary sense, how might we grasp when someone is dedicating one’s self to living as a person for all seasons?

Here’s what I conclude.  A person for all seasons accepts the way in which the world evolves and has come to work, rather than to persist dogmatically, in attempts to stuff reality into an outdated “straight-jacket” of preconceived beliefs.  Believing isn’t knowing, of course.

Here, I draw upon my perceptions of Stan Brewer’s world view.  How might it be applied now, to economics, my specialty?  Economics, at least it’s macro aspects, is not unlike politics or religion.  It rests atop doctrinal propositions about how the world is perceived to work.  At a paradigm’s birthing, its results may be compelling.  Over time however, outcomes may become lackluster and dated.  Ultimately, any particular paradigm is likely to be replaced, politically.

When beliefs collide with reality then, a person for all seasons would retain pliability.  They would continue to evolve amid uncertainty, discomfort, and even fear.  And they would commit to moving on, to “the next right thing to do.”

The economic world changes and evolves, therefore belief-based economic thinking must evolve to stay apace.  Timing is crucial of course.  Mortals, as poets observe, adjust not only to an appointed time to enter, but a time to exit as well.  So it is with macroeconomics.  There’s a time to blossom, a time to wither, and a time to be reborn in some way, into the next paradigm iteration.

I’m focusing of course, upon transitions among macro paradigms.  What I’m doing also, is to focus on what it means to be a person for all seasons; what it means to endure when aspects of one’s belief system become swept into the dustbin of emerging political reality.

Here then, we’re taking an abbreviated look at each paradigm’s raison d’etre, its major economic programs, and finally, its political death.

Laissez-Faire came into being as the feudal system was segueing into capitalism, described by Adam Smith in 1776.  Capitalism’s programs of course, were no public programs at all.  It harbored a certain contempt for any form of government intervention.  Instead, free-market economics championed “hands off” by government, along with an individual’s right to hold private property.

Ultimately, after one and a half centuries of successful dominance, laissez-faire came to crisis during a bubble economy (involving rampant land speculation) accompanied by the excesses of an unregulated banking system, and by an unaccommodating public philosophy that heaped contempt upon any public form of market oversight, or any intervention to get a stalled economy moving again.

Laissez-faire’s successor was Fiscal Keynesianism.  It emerged in the 1930’s, named after English economist JM Keynes, and was pragmatically energized by President Franklin Roosevelt.  FDR’s programs included bank regulation, but most of all, demand stimulation through public employment programs. This stimulation helped to stoke household spending with private businesses, and subsequently, that drove renewal of business investment.

Keynesianism began to wane however, commensurate with the Vietnam War.  The rate of growth slowed, even as its underlying rate of inflation accelerated.  Advocates grew increasingly unable or unwilling to manage compromise, and Ronald Reagan’s political and economic philosophy seized the day, in the Presidential election of 1980.

Reaganomics rejected fiscal policy, except for ample tax cuts of course, conferred especially upon the well-to-do.  Supply-side advocates asserted that investment growth would spring from policies to stimulate saving and therefore investment, as opposed to Keynesian policies to stoke household spending, as investment’s precursor.  Since poorer Americans save comparatively little, Reagan’s programs rewarded those already “in the money.”