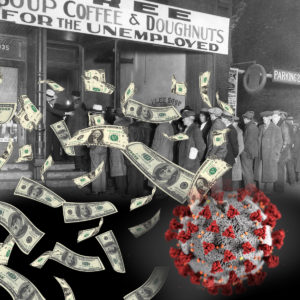 There’s no official definition for economic depression. Intuitively it means protracted recession when expectations sink and malaise sets in, to become the new norm. Breaking out would be daunting due not only to economic realities but also to political intransigence heightened by continuing culture warfare.

Sound all too possible? Could America be verging on getting stuck in a permanent economic quagmire?

Brookings now estimates “students currently in school stand to lose $10 trillion in labor earnings over their work life. To get a sense of the magnitude, this sum is one-tenth of global GDP, or half of the annual economic output of the United States.”

The consequences of Covid-19 and Trump Administration leadership defections are ominous. Mind you, these huge numbers apply not to future students, but to currently enrolled students only.

As August begins, Congressional choices are boiling down to multiple rounds of “quick fixes” on one hand, or longer-term investments on the other. The latter appears well-reasoned, but expensive unless converted to increases in economic and social productivity, paying dividends even to Americans yet to be born.

Public investments could begin with renewal of infrastructure including roads and bridges. Some could take the form of educational deepening across America’s labor force. But investment-wise, who gets to say how our country should evolve, let alone how it ought to be rebuilt and reeducated? In transportation for instance, should we be building new freeways or new rail systems?

Following World War II, Germany and Japan created domestic education and labor preparation programs mimicking those connected to what the “Greatest Generation” called American Exceptionalism. But over time as Japan and Germany strengthened, America’s competitiveness weakened, comparatively. Looking back, our failures could be described aptly as death by a thousand cuts. Both political ideologies share responsibility.

To see what could have been and what could still be, check out the link at the bottom. It’s from the International Labor Organization headquartered in Geneva. There you’ll find example upon best-practice example of how America could improve its labor market performance.

With federal Covid-19 stimuli now running thin or lapsing, not everyone is in the same sinking boat. Wealthier families for instance, are generally in fine shape due to the Federal Reserve’s undergirding of financial markets. Public debt mounts of course, with payoff implications to be borne by future generations.

Minority and more youthful workers face the most profound losses. They also were big losers in the Great Recession. Along with sinking earnings, most now weather the Covid-19 crisis with little or no wealth cushion and with mounting rent and debt repayment commitments. What sort of society would choose willfully to place some of its most vulnerable citizens on the knife’s edge, twice within a single decade?

The Atlantic’s Annie Lowrey describes economic implications growing out of failure to bring the pandemic under control. Included are impacts on millions of families in which parents cannot fully commit to the labor force due to previously unanticipated child rearing responsibilities. Compounding financial angst, over 100,000 small businesses are not expected to reopen, sinking consumer confidence anew. In New York City for instance, fully one-third of its small businesses will not reopen, it is estimated.

Where are state and local governments when gaps need to be filled with public services they provide? Lowry notes public resources are fast-evaporating due to shrinking sales tax and income tax revenues. This means many publicly funded jobs will be landing on the chopping block, even as the Republican-denominated Senate opposes bail-outs based upon ideology. Some senators reason public support diminishes worker enthusiasm for job-holding.

Of course, as federal financial intervention dries up, millions more families will be sinking into the economic morass caused by job loss, reductions in work hours, and just plain being overwhelmed in the face of mounting rent and debt repayment obligations. Among consequences noted by Lowry? Increased hunger, homelessness and social isolation with far too many babies left to grow up in stressed households.

Does this appear as an economic depression scenario? Many are beginning to believe it could be so. In the face of uncertainty, my subjective assessment leads in this direction. Perhaps chances of a 1930’s-type depression run as high as 50 percent.