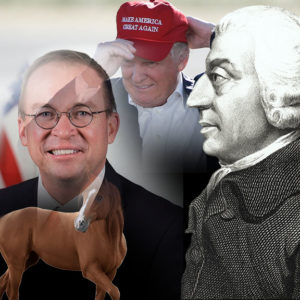 Adam Smith was a moral philosopher. Two centuries ago he asked and answered questions about “right action;” about how moral individuals ought to act and what moral societies ought to do.

Mick Mulvaney? Well, he’s a Republican politician who represented South Carolina in Congress, then served in Donald Trump’s cabinet and as acting Chief of Staff as well as acting Director of the Consumer Finance Protection Bureau (CFPB). His role? Presumably to oversee for Trump, the watering-down of the Bureau’s founding mission. Unsurprisingly, while in Congress Mulvaney was a staunch CFPB critic.

Adam Smith on the other hand believed in aligning one’s pursuit of self-interest with society’s attainment of the good of the whole. If alive today, he would advocate for clarity of the CFPB’s founding mission. Arguably, he would oppose politicians such as Trump and Mulvaney, too often baiting voters with culture warfare-type issues, then switching to motivate support for policies too-often violating the long-term interests of their families.

It’s not surprising recent Trump appointees at the CFPB manipulated payday-lending research to achieve Trump’s goals, according to Nicholas Confessore and Stacy Cowley of the New York Times, citing research by departing CFPB staff economist Jonathan Lanning. Within its original mission was strong advocacy for low income families to wean themselves away from living paycheck to paycheck including repeated borrowing from high-cost payday lenders.

Confessore and Cowley anticipate the forthcoming release of a revised rule, no longer requiring payday lenders to assess whether customers can afford their fees.

Metaphorically, it requires returning the plow horse—too long sidelined as a “hobby horse” mainly for the pleasure of the pseudo-capitalist’s family—back into the field, in service of the common good through productively pulling the plow.