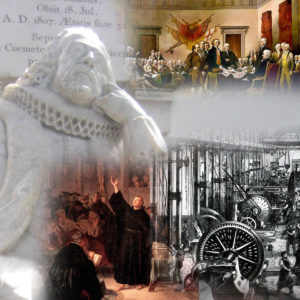 Look carefully at the expression on Francis Bacon’s face.  He was a consummate Type II.

I remain spellbound by Bacon’s expression, placed there by Henry Weekes, his sculptor.  Weekes’ masterpiece is tucked away in the Trinity College Chapel at Cambridge University.

What was the sculptor attempting in his depiction of Bacon?  Why does Bacon’s message have urgent appeal, especially now?

Philosopher and statesman Francis Bacon lived at the beginning of a pivotal period, evocative of religious reformation, forthcoming industrial revolution, and the eventual rise of democratic governance on the North American continent.  The old world into which Bacon was born in 1561 had its basis in authoritarian control through monarchs and clerics.  Yet, in his lifetime those threads of feudalism were beginning to fray.  Type I society was fading rapidly into Europe’s past.

As author of the English Enlightenment, this is the wonder portrayed in Bacon’s countenance.  It is wonderment of movement away from Type 1 society, toward Type II.  In this transition, his vision is of a better world, awaiting.  It is a world of new challenges and opportunities for the common woman and the common man.  It is wonderment at forthcoming political freedom, human creativity, economic growth and scientific discovery.

Moral philosopher and Scottish economist Adam Smith was similarly motivated by Enlightenment wonderment, although he lived almost two centuries following Francis Bacon.  For Smith, material aspects were paramount.  Through the embryonic capitalism he pioneered, Smith foresaw an ever-rising standard of living.  Soberingly however, Bacon and Smith’s Enlightenment vision is under assault from authoritarian command and control regimes, now expanding across the planet.  If this governance strategy takes root in the United States, progress will be pushed back toward spirit-deadening aspects of feudalism.

As contemporary Americans, what if we could sort ourselves into two archetypal groups, based upon Bacon and Smith’s Enlightenment wonderment?  How would you identify?  Would you be Type I or Type II?

Type I is backward-turning instead, away from objectivity and science, toward belief-based authoritarianism.  It thrives in isolated pockets of digital social media.  It feasts on fake news, conspiracy theories and a turning away from progress that has demarcated mainstream America. Type II is depicted by the forward-looking wonderment in Francis Bacon’s countenance.

The 2020 election will profoundly impact whether a Type II world is secured anew, or Americans instead find ourselves being pushed into aspects of a pre-Baconian world.

In which category do you choose to be?  Try this diagnostic inquiry.

Simplistically, Type I people approach their life’s strategy, first by redoubling their commitment to what they believe.  Then, they use belief as the touchstone for cherry-picking aspects of the empirical world they will accept, or not, in consort with others who occupy their particular digital cave.

Type II people on the other hand, begin not with what is believed, but with what is known objectively.  They use an empirical life strategy as their touchstone by which they examine and sort beliefs on the basis of what is compatible with objective reality, and what is not.

How will you emerge from the pivotal presidential election of 2020?  Will you distinguish yourself as a Type I person?  Or as a Type II?

Reproduced below is a compatible prior post connected to Karl Popper, philosopher of science.

If you’re a believer and not a knower, your lack of knowing ought to be acknowledged publicly, whenever you place your beliefs on public display.

Do you know which you are?  Knower or believer?  It varies of course, with the proposition encountered.  Is your favored proposition, one with a basis in verifiable knowledge?  Or instead, do you assert it as reality although it can be defended by little more than belief?

It’s crucial.  For all of us.  Confusion between when we know and when we don’t, stokes debilitating fires of culture warfare.  It’s warfare based too often upon false realities, conspiracy theories, disinformation campaigns and so much more.  Too often its warfare that rushes into combat on cable TV or the Internet, certitude-confidant about how the world works, but with a basis in little more than belief.

Bleak?  How bleak is America amid the culture wars?  If you enjoy Dave Berry’s political humor, check out his culture war-laced 2019 Year in Review.

Utah is a place of long-standing culture warfare, amped by rampant misconceptions surrounding believing versus knowing.  In sum, if you advocate for a proposition that can’t be invalidated by objective inquiry, then your assertion is not knowledge-based, but belief-based instead.

In Utah’s ubiquitous Mormon testimony meetings, adherents attest among other things, the Book of Mormon to be “true” in its claims; to be the written word of God.  Such claims are belief-based and not knowledge-based however.  Philosopher of science Karl Popper explains:

Propositions claiming the status of public knowledge must be evidence-based and therefore refutable.  They must be innately capable of being overridden by impartial inquiry.  If adherence to a particular belief system is required as a precondition for the proposition’s embrace, then it’s one of belief and belief alone.

There’s a tolerance aspect to Popper’s rule.  When belief claims collide, their sponsors should reflect on this.  As believers rather than knowers, wisdom ought to pull us in the direction of tolerance for competing belief claims and their advocates, whether beliefs are aired on the Internet, on cable news or in civic-oriented debates at City Hall.

In Utah and elsewhere, there’s a corollary for Mormon missionaries; for anyone engaged in proselytizing.  When one confidently approaches someone’s door, one’s message ought to be delivered heartfully and mindfully this way.  Ready?

The belief system of the person on the other side of the door isn’t any less “true” than one’s own.

You may also be interested in How to Repair Capitalism looking forward (not backward).