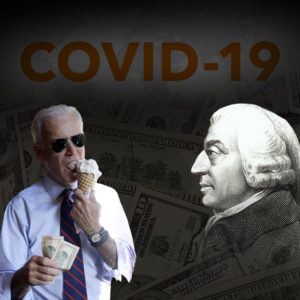 Trumpian banter sounds far-too-much like the run-up to Civil War.  Should populous New York (and other politically liberal states) be forced into bankruptcy while ministering to their citizens?  So says Senate Majority Leader Mitch McConnell in the wake of America’s Covid-19 meltdown, April 22.

What ought the leader of “the loyal opposition” Joe Biden, do?

First off, stay the course for the long-term good of our Country.  Don’t get lost amid “flip the libs” baiting, McConnell’s included.

America needs steady-handed political moderates, especially pragmatists in service to stewardship needed by the generation just behind this one.

How might stewardship look?  It should focus on the contemporary reinvention of America, consistent with our Country’s best responses from our darkest hours including the Great Depression, World War II, even the Civil War.

Getting the plow horse back into the field is now America’s greatest stewardship challenge.  We won’t become great again in the sense of Donald Trump’s call-out to his MAGA followers, until American capitalism is first retooled to become great again.

Where to start?  Stop rigging, gaming and other pseudo-capitalist schemes perpetrated by financial elites from both political parties.  Stop vulture capitalism in its tracks.