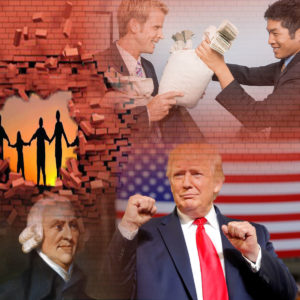 Tragically, the path toward capitalism’s renewal—and America’s renewal—is blocked by Trumpian intransigence. It’s not the only blockage, of course.

A century following Smith however, industrialized economies were growing more complex and his straightforward prescription, much less tenable. The Great Depression signaled that capitalist doctrine needed a cleanup; a reinvention of its moral aspects. Public policy needed to be recalibrated with how the real economic world was coming to work.

The fallacy of saving illustrates the “First Glitch” of capitalism, but a second glitch—coming to light in recent decades—exists also. The Second Glitch is pseudo-capitalism.

Simplistically, it is personified in the casino-type business strategies of entrepreneurs including Donald Trump and others, and differentiated from those that are common good-oriented. For instance, some will recognize the businesses of Elon Musk as illustrations of moral capitalism. In place of tendencies toward wealth-hoarding and other financial schemes for rigging and gaming, moral capitalism instead eschews fraud, both illegal and legal. It channels investment to create the type of future we seek for our kids and for other people’s kids as well.

Surely it would pursue Adam Smith’s commitment to a universal and ever-rising standard of living. However it would also entail something Smith never needed to consider: the quality of life. Attributes including clean air, clean water and solid public health outcomes now rise front and center, invariably.

Pseudo-capitalists continue to sneak below the public policy radar of legitimate capitalism that historically awards tax and regulatory breaks only to businesses operating within domains considered moral. Too often they are able to secure public benefits merely by pursuing self-serving schemes including those laced with rigging and gaming characteristics.

The challenge to contemporary American capitalism then—and the challenge to America’s renewal—is to differentiate legitimate capitalism from pseudo-capitalism. The latter should become subject to public disincentives including tax and regulatory constraints.

The huge challenge standing in the way of moral capitalism’s blossoming is this. We need a renewed public vision, democratically determined. In Adam Smith’s day, the common good was self-evident. Not so now, however.

The future we want for our kids and grandkids must be teased out of a complex world with many wants and far too few resources available to fulfill them. How do we begin to make such decisions democratically? How do we choose amid such complexity?

The answer, tragically is this. So long as America is being blown apart by government-hating contempt for rational, democratic process to secure the future, we won’t be able to do anything big or hard—or together. Regarding reform possibilities then, the Trumpian mantra of “No, No, Never” creates an insurmountable barrier.