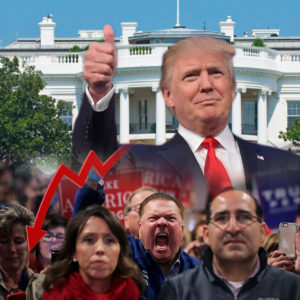 The mainspring of Donald Trump’s base is anger.  It is fueled by humiliation.

Translated to households, Reds are failing economically relative to Blu­­­­­­­es. Median household income shot up 13 percent for Blues, while for Reds, it declined about 4 percent over this ten-year period. It’s a sad statistic that became a stunning prologue for both the 2016 and 2020 Presidential elections.

Counties that delivered election victories for Donald Trump in 2020 produce only 30 percent of America’s GDP, down from about 33 percent in the 2016 election. On the other hand, counties that delivered for Joe Biden produce 70 percent. This points up a huge economic imbalance with profound implications!

New York Times columnist Thomas Friedman reflects on electoral numbers and draws upon Harvard political philosopher Michael Sandel to spell out consequences. In his new book, “The Tyranny of Merit,” Sandel observes that the politics of humiliation is at the heart of Trump’s appeal. “Trump was elected by tapping a wellspring,” Sandel observes, “of anxieties, frustrations and legitimate grievances to which the mainstream parties had no compelling answer.” These grievances,” says Sandel, “are not only economic but also moral and cultural; they are not only about wages and jobs but also about social esteem.”

Biden won the Presidency, but with practically nonexistent “coattails.” At the state level, elections were dominated by Republicans. Even as Trump is moving off of the “official” American political stage, other Republican demagogues are waiting in the wings to fill his shoes. Meanwhile, America remains deadlocked by our constitutional system that rewards polarization over consensus. In the Senate it’s a throwback to the geographical layout existing at our nation’s founding, over two centuries ago.

Why does it matter, asks Brookings? This profound economic rift, they say, divides the nation and underscores the near certainty of continued clashes between the political parties, fueled by continued alienation and misunderstanding. Unless President-elect Joe Biden finds a way to speak to the profound humiliation felt by many working-class voters, Friedman and Sandel warn that resentment borne of humiliation will continue as the most potent political sentiment of all.  ­

Cry More, Lib is about insecurity borne of economic failure. Too often the anger vented by Cawthorne and others is also mired in willingness to vote against one’s self-interest, for face-saving purposes. But shouldn’t it be asked also? Will your resentment-fueled actions be viewed a decade or a generation hence, by your kids and grandkids, as failing the best interests of your families and your nation?

Who Can Win America’s Politics of Humiliation?