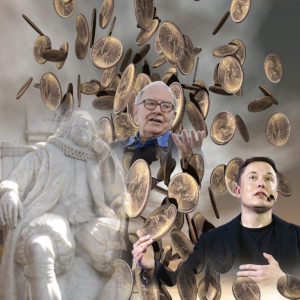 How to reclaim a sense of Francis Bacon’s wonderment about capitalism’s future?  About America’s road ahead?  About the future of participatory American democracy?

Let’s start with these three things.  We’ll be expanding on each and explaining their necessity for America to thrive.

First, demarcate productive capitalism.  Then, draw a bright line around what capitalism is not; about what capitalism should not be.  Screen out frauds, scams and cons.  I call these sorts of business strategies, pseudo-capitalism.

Ask yourself this.  Do you want America’s commercial future to look more like the business empire of Donald Trump?  Or do you prefer instead that the future we pass to our kids look like the business strategies of people like Tesla’s Elon Musk or Omaha’s Warren Buffett?

Second, to get to a Buffett and Musk-type capitalism that actually serves America’s interests, we must distinguish what productive capital is, and what it is not.  Capital is not finance per se, although finance is a necessary component used to purchase productive capital in order to make world-class goods and services.  Assets used by pseudo-capitalists must be taxed and regulated at a higher rate in order to dissuade fraudsters, scammers and con artists.

Third, to demarcate productive capitalism and capital, America requires a renewed vision of the future we want to create, and the capital needed to create it.  This won’t just happen.  Mission must be consciously constructed.  Perhaps America’s culture wars are about this.  Perhaps the two sides are fighting in a free-for-all about what America’s mission shall be.

The Future of Capitalism

Stay tuned as we drill down on these three things, crucial to the future of capitalism and to America’s future.  First, demarcate productive capitalism.  Second, distinguish what productive capital is, from what it is not, then allocate public rewards and penalties accordingly.  Third, make these choices against a backdrop of America’s emerging mission, sought by the majority of our citizens.

Here is a link to a section in this blog which focuses on How to Repair Capitalism.