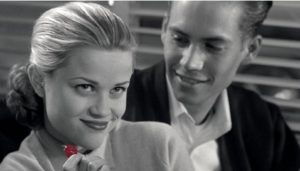 It seemed as though I was living through a scene from Pleasantville, although the film wouldn’t be produced for another thirty years.

The Governor’s Chief of Staff was clear.  If they don’t come up to participate in the political process at the Utah capitol, then we’ll go down to meet them at Mormon Church headquarters.  And so it was.  Kurt made occasional pilgrimages five decades ago, from the Governor’s Office, to learn about which way the political wind was blowing at 47 East South Temple.

Gary Ross‘s 1998 film introduces Big Bob, Pleasantville’s mayor and the town’s primo authoritarian whose stock in trade is repression; personal, social, and political.  His edicts never cause much annoyance to citizens though because they crave the stability and security Big Bob supplies.  Indeed, Pleasantville loves mindless conformity, at odds with essential staples of democracy such as libraries and public art, absent there.

Pleasantville’s a bit like Camelot where it may never rain ‘til after sundown.  At its high school, the basketball team never misses a shot.  Yes, Pleasantville’s a mirror image of 1950’s Leave-It-To-Beaver perfection.  Nothing ever causes discomfort or unpleasantness; conformity runs rampant; everything’s always the same.  No profanity, no adolescent sexual experimentation, and no awareness of very real problems existing out there in the very real world, beyond Pleasantville’s boarders.

Gradually though, the aura of perfection becomes tarnished.  Then the real world emerges as Pleasantville’s image evolves away from idealistic monochrome, toward realistic Technicolor.  Along the way, its citizens make real-world transitions.  Even Big Bob permits himself to lose his temper in a public meeting.

So, how to get out of mythic Pleasantville?  Indeed, how to not get caught up in it from the beginning?

Try this.  Ask lots of challenging questions that’ll keep authoritarians off balance.  “Ditch” their idealistic prescriptions about how the world is supposed to work.  If you do become drawn in, practice how to exit immediately.

In short, don’t get scooped.  Remember: No scooping allowed!