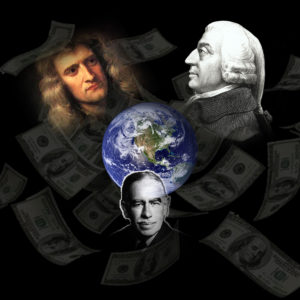 Where to start? Let’s start here. Macroeconomics is largely science but built upon huge metaphysical assumptions. One notable assumption is orderliness. We should ask then, what happens when some assumptions, orderliness included, no longer describe aptly, the way in which the contemporary economic world has come to work?

Our focus initially is upon physical scientist Isaac Newton, to demarcate the turning away from a bold new opportunity to also adopt non-conventional economic thinking, about a century ago. Adam Smith thought Isaac Newton to be the greatest human ever to have lived. Consequently, Smith sought to create an intellectual system for understanding the economy analogous to the one for understanding physical space carved out by Isaac Newton in the decades immediately preceding Smith’s career.

Albert Einstein undermined the dominant orderliness paradigm of physics of course, beginning with publication of his path-breaking article on the special theory of relativity, in 1905. Eventually Einstein saluted Isaac Newton as profoundly brilliant for his time, but unable to see beyond the 17th Century-world he described.

Newton’s obsession came in part from his observation of how the planets revolve around the sun, perfectly. But following Einstein, standard Newtonian physics could no longer “stuff” all observations of the physical world into Newton’s “orderliness straight-jacket.” As a consequence, Newton’s methodology of looking for orderliness was qualified and its use, restricted to certain common physical phenomena. Beyond that, randomness evolved to become a better explainer and predictor, outside the level of our solar system or beneath the level of the molecule.

Unfortunately, the economics profession did not extrapolate fully from Einstein’s discontinuous break-through. If it had, contemporary economists would be much more tenuous about asserting equilibrium as the natural state of the economic world, as in college-level Economics 101. Methodologically, equilibrium is taught as follows.  The quantity of goods and services supplied by firms in simplistic economic systems must be set equal to the quantity of goods and services demanded by households.

Smithian laissez-faire worked well for decades. About a century following Adam Smith’s death however, conventional macroeconomics entered a period of revisionism not unlike the one occurring in physics. Unfortunately, perhaps due to the premature death of JM Keynes, reformulation was choppy and incomplete.

Keynes provided the practical road-map out of which a thorough escape from methodological economic orderliness could have been taken, as he did in the Great Depression. For the most part however, economists following Keynes lacked the creativity of 20th Century physicists following Einstein. Had Keynes lived a decade or two longer, his contributions might have been generalized, then solidified into something analogous to the methodological form laid down by Einstein.

One practical way of looking at Keynes is this. Order returns eventually to actual economies modeled upon laissez-faire principles, but not immediately, as dislocations of the Great Depression illustrated. In short, the quantity supplied of goods and services far-exceeded the quantity demanded, following the October Crash of 1929.

Then, conventional laissez-faire economists appealed for more time, arguing for theoretical forbearance and practical abstinence from government intervention. In the long-run, orderliness will return; just wait. In the long run we shall all be dead, Keynes quipped in response. What he inferred was this. During protracted downturns called depression, only government is capable of entering the marketplace to stimulate return to real-world normalcy. Otherwise, dysfunction may extend indefinitely.

Under Franklin Roosevelt, the federal government became the temporary employer of last resort. Eventually as normalcy returned, Newton-type orderliness again appeared under the guise of equilibrium, as the quantity of investment undertaken by the business sector equilibrated with the quantity of saving provided by the household sector (in the simplistic two-sector model).

To summarize, innovative macroeconomics has been insufficiently innovative.  Sometimes the profession stumbles through predicting how the road-map forward ought to appear, thereby prolonging recovery and extending dysfunction. Coming up next: there have been liberal political failures also; not conservative failures only.