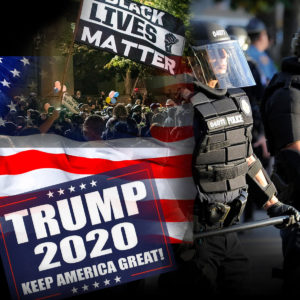 For President Trump and his campaign, the Portland protests and similar eruptions elsewhere are a dream come true. This is a president who, quite literally, has nothing to run on — no positive achievements to show. His only chance is that his adversaries will create opportunities for him. Let’s be honest: The television footage of police ducking rocks, bottles and other debris plays directly into Trump’s hands. A country that looks like it’s coming apart — “American carnage,” as Trump cynically called it during his 2017 inaugural speech — is the ruined turf on which he would like to fight for reelection in November.

I’m adding a personal note. My deceased spouse Elizabeth Gail worked administratively and journalistically for the Associated Press prior to our marriage. She believed Ignatius represents the highest standards of their profession. With Gail, I value his work for accuracy, integrity and professionalism. Ignatius’s current title is Associate Editor of the Washington Post.