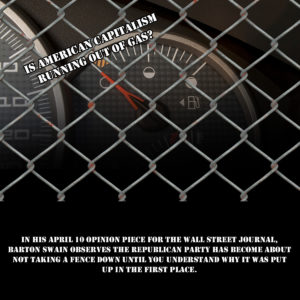 Old ideas keep America on course but they also solidify and stagnate. Eventually the old overwhelms elected officials, business leaders and policy-makers. They get hemmed in by the historical tried and true. But now we’re living and working in the dynamic 21st Century.

In his April 10 opinion piece for the Wall Street Journal, Barton Swain observes the Republican Party has become about not taking a fence down until you understand why it was put up in the first place. It’s about attempting to preserve the status quo. The Democratic Party on the other hand Swain argues, has been and ought to be about dynamism; about change.

Claims Swain: Joe Biden now presides over a party that has become moribund in its ideology; in its capacity to create dynamic change. Would Adam Smith agree? If he agreed, what might be Smith’s revitalizing prescription?

We’re taking a “shot” at this, here. Stay tuned.