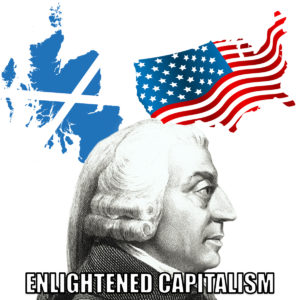 Three centuries ago, a new vision of how our world works was taking shape in Scotland.  We’ll call it Enlightened Capitalism.  It was based on emerging democracy, upon the right to hold private property, and upon the free exchange of goods and services without government looking over citizens’ shoulders.

Adam Smith was an 18th Century philosopher focused on how individuals and communities should act, morally.  As capitalism’s founder, he believed selfish acts should be held at bay.  Rather, these should be tempered by the needs of one’s community.  Self-interest rightly understood, is how Smith would have described capitalism’s animus.  Today, Adam Smith would be called a communitarian.  He would not be known as a libertarian.

Adam Smith held one erroneous belief however, which he borrowed from Isaac Newton.  Like Newton, Smith thought the economic world could be explained by expecting it to always work in an orderly manner.  In physics, this world view worked initially, but then its limits were called out as early as 1905 by Albert Einstein.  In economics however, laissez-faire advocates still believe government causes rather than repairs market disorders.

The Great Depression was a devastating time for laissez-faire beliefs, beginning with the stock market crash of October 1929.  Household consumption took a nosedive, business investment tanked, and unemployment soared.  Traditional economists believed orderliness would return naturally.  When it did not, their views were discredited by the mainstream.   Even now however, many continue to believe the economic world would work better if government is held at bay.

President Franklin Roosevelt replaced laissez-faire with a new focus on the use of government as an economic stabilizer.  He created public programs to put people back to work.  By the 1950’s, a new consensus had emerged among Americans.  It was that consumption, employment and investment could be steered through the shoals of recessions and depressions by the proactive use of economic policy.

Several decades later however, America is burdened anew with a second economic crisis.  Unlike a century earlier, the hallmark of this crisis is pseudo-capitalism or fraud.  And like 1929, it is triggered by dysfunctional thinking that still lurks inside of some capitalist thinking.

Donald Trump won election with a plan to drain the swamp, he called it.  But the economic swamp remains very much alive, although different from how Trump describes it.  Instead of draining it, he is a contributor and one of its perpetrators.

A pre-election article from the New York Times illustrates the slippery slope many Americans sense, but feel powerless to stop.  “As Virus Spread,” the October 15th headline alerts, “Reports of Trump Administration’s Private Briefings Fueled Sell-Off.”  Implicit is an inference that while Trump was calming Americans, some in his administration were giving economic briefings to select audiences of donors and others.  Allegedly, this helped them profit from contrarian financial strategies they put into play, at variance with Trump’s public statements that all would be well.

IS ENLIGHTENED CAPITALISM POSSIBLE IN 2020?

America is at a crossroads, not unlike the crossroads encountered during the Great Depression.  Then, the underlying problem was an unrealistic expectation the economic world would respond in an orderly manner.  Now, the underlying problem is pseudo-capitalism and a new economic role is required of government, to stop fraud.  During the Trump presidency, this role is akin to removing the fox from standing guard over the chicken coop.