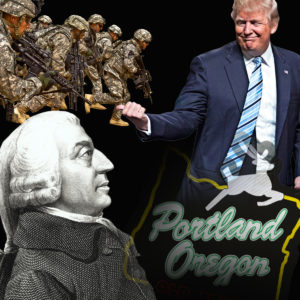 ​Donald Trump is losing the election. Or is he?

A devilish bit of Trumpism is now in the air, in Portland, Oregon. Conservative columnist Bret Stephens gives a clue to where Trump’s election strategy is headed. It’s about scaring conservative-leaning suburban women who might chose Joe Biden but fear if they do—without Trump as their protector—urban unrest will accelerate and reach the likes of Orange County neighborhoods.

Expect more troops on urban America’s streets in this diabolical pact with evil. It’s the ultimate card in Donald Trump’s devilish bag of tricks and it has a name. When carried to the limit—which America is fast approaching—it’s called martial law.

Liberal Paul Krugman speaks of the selfishness epidemic in America. This right-wing pseudo-philosophy is not confined to Republican voters, however. It has been building across all of America for decades, particularly since Ronald Regan’s presidency.

The selfishness of which Krugman speaks goes well beyond right-wing authoritarian disdain for mask-wearing. Ultimately, “me first-ism” is claiming American capitalism’s vitality. It’s doing so now.

Sorely needed in America is a refurbished brand of Smithian capitalism. I call it moral capitalism. It’s about deferring the pursuit of Donald Trump-type self-interest and instead supplanting unvarnished selfishness with self-interest rightly understood.

Adam Smith was a moral philosopher who recognized capitalism’s values as the best way to raise community living standards and ultimately community well-being. In his epic book on ethics, Smith spoke most favorably of what he called the faculty of sympathy. In short, that’s the capacity of individuals to supplant selfishness by putting oneself in the shoes of someone else. Does this sound like Trumpian libertarianism?

How could America now find itself so unhinged as to position our metaphorical cart in front of the productive horse of capitalism? How could Trump and his followers be so far off the mark of what’s needed to make capitalism succeed?

Isn’t it time to get the plow horse of capitalism back into the American field, in front of the cart, pulling the plow, pulling entire communities forward simultaneously?

The Cult of Selfishness is Killing America: