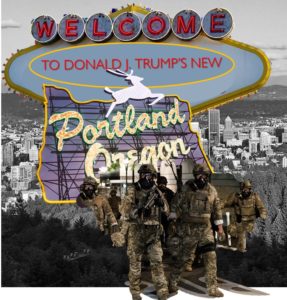 One wonders. A day following our election on November 3, will Americans awake to a profoundly painful reality? Will the United States have been fully taken over by an authoritarian regime, equivalent to the iron-fisted totalitarian government now overseeing Hong Kong?

Consider what is happening in Portland and what is about to happen in Chicago.

Writing for the Washington-Post, Greg Sargent reflects on a recent interview with Michael Chertoff, director of homeland security under George W. Bush. Chertoff describes Trump’s threat to send federal law enforcement into liberal-run cities as “very unsettling.” So does Tom Ridge, also a homeland security secretary under Bush. Their reflections come on the heels of Trump’s threat to invoke the Insurrection Act of 1807 to stop peaceful Washington D.C protestors in the wake of George Floyd’s murder on a Minneapolis street.

One wonders: On America’s scary downward slide toward Hong Kong, where may Donald Trump’s authoritarian overreach pop up next?