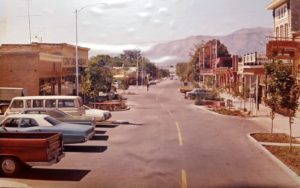 Was I a stupid kid or what?  Sometimes I wonder.  I  think of myself then as a responsible kid who usually did the right thing.  But I remember being conflicted by the usual adolescent urges when I was 16.

An attractive Payson High School coed yelled “Don’t Look!” as she burst into the only available Brigham Young University dressing room, then stripped naked in front of me, quick-changing into a burlesque-style performance costume, then rushing to meet a stage call.

I didn’t look.  Now I wonder.  If I was catapulted backward into that regional high school one-act play festival at BYU, would I look…or what?  Not sure.

Then, a near-identical thing happened at Ogden High when I was 17.  At that moment I was also applying makeup for a second-act entrance, as male lead in our school’s annual dramatic production.  Just then Ann, also a cast-member, burst into the room shouting.  She also needed an immediate costume change.  Ann too needed to meet a stage call momentarily, in a swim suit.  “Don’t look, Jim!” she yelled.

Did I look?  Hmmm.  Maybe there should be an upcoming post on how adolescent males—now and then—might react to spontaneous female nudity.  It would be a humorous post, I’m sure.

One other thing is sure.  Ever since that BYU experience, I’ve been curious about nearby Payson, Utah.  I’ve wondered how it might be.  So on our recent trip to Utah from Colorado, Renae and I drove from SLC, then took a 60-minute meander around town.

Payson’s an exurban community of about 20 thousand, located toward the Southern edge of a county that bills itself as Utah’s most conservative, within America’s most politically conservative state.

Renae’s friend Sue grew up here and we decided when we returned to Colorado, to share our photos and impressions with her.  Well-manicured community.  Hardly anyone in the streets.  Businesses closed on Sunday.

As we drove, we mused about Sue’s adolescent stories.  About her neatly manicured, up-scale neighborhood and home.  About the idyllically beautiful elementary school she attended.  About her family’s problem with alcoholism and its curious standing in the local community because of it.

Sue remembers being elected president of her Mormon religion class, although her family didn’t identify as Mormon.  Then, in that Utah locale, high school religious instruction was obligatory, both for Mormons and non-Mormons, and always administered by a Church-approved Mormon instructor.

Sue eventually graduated from Utah State University in Logan, the same school I attended on a debate scholarship in my freshman year.  Sue was five years younger though, and her tales of coed life in Logan left me wondering why my experiences there seemed so bland, comparatively.

Often, in Payson and Logan Sue observed, rampant boozing and sexual acting-out were followed by “coming to Jesus” transitions.  These were complete with obedience pledges taken from young males, then accepted by older male Mormon authorities.

Through administered repentance, Mormon leaders vanquished adolescent disobedience, even while extending vaunted two-year missionary calls to proselytize.  In this manner Sue reflected, Mormon authorities converted young males with high degrees of success and bonded them to life-long devotion to Church, to family and to Mormon community.

Later, back on Colorado’s Front Range, Renae and I re-watched the 1990’s film Pleasantville, then used it as a prism for reflecting on Payson and similar Mormon communities throughout Utah.  Some of these reflections lie just ahead.