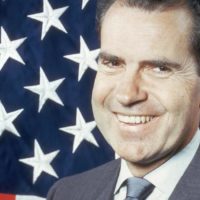 Well, that’s not exactly what President Nixon said, but close.  The quote was “I’m a Keynesian now.” Previously Nixon favored less government intervention in the economy.  Now, if Nixon was around he would be branded by his own political party as socialist.  He’d gone so far as to propose a guaranteed minimum income for all. During the Great […]

When last we looked in on our beloved, co-dependent zombies…Adam was lighting up…as the duo ambles across the Great Truthiness campus, pondering events of another remarkable day…..What will happen next?