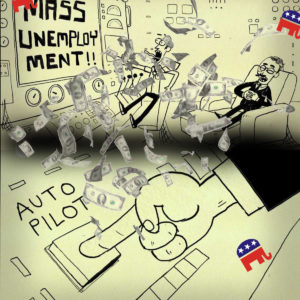 They do.  More recently however, industrial policy perspectives are getting a makeover from many on the political right.  If Donald Trump captures a second term, the Republican “take” on government’s appropriate economic role may grow ever-closer to the role long-advocated by Democrats.

This on-going shift is chronicled by Washington Post writer Jeanne Whalen.  Indeed as Whalen points out, it’s also a shift with uncharacteristic bipartisan support, therefore legislation is likely to clear the president’s desk by 2020’s end.

According to Will Wilkerson of the conservative-leaning Niskanen Center, this new economic thinking is a qualification of laissez-faire or so-called free market economics.  It’s naïve Wilkerson argues, to assume the standard libertarian position that “the market” always responds spontaneously to structure itself in an ideal way.

Florida Senator Marco Rubio is very much on board with Niskanen’s perspective.  He argues government must identify industrial sectors critical to national security and economic growth, then spur investments in them.  China’s economic rise is mentioned frequently as the antagonist.

Rubio’s proposals include multi-billion dollar federal subsidies for domestic chip-making along with related supporting research.  Overall, such proposals are reminiscent of decades earlier funding support for DARPA, the Defense Advanced Research Projects Agency.  Along with not only military but many civilian accomplishments, DARPA played a central role in launching the Information Revolution.  It led the development of ARPANET—a prototypical communications network initiated nearly half a century ago—that birthed the digital protocols launching the Internet.

Government for Republicans (and for all)

A doctrinal rationale for industrial policy has been constructed within Capitalism in Crisis.  It will be capsulized here in future posts.  Contextually also, I argue America must drill down on three things crucial not only to the future of capitalism, but also to the future of America.  First, we must demarcate what is productive capitalism.  Second, we must distinguish what productive capital is and differentiate it from what it is not, then allocate public rewards and penalties accordingly.  Third and finally, Americans must make these democratic choices against a backdrop of whatever and however we perceive our country’s emergent mission to be.

I’ll be taking a serious look also via these Carpe Diem posts, at fallacious doctrines and bungled economic policies supported by the Republican Party, going all the way back to the Great Depression.  Following that, I’ll look also at what has been mishandled economically by the Democratic Party.

Here is a link to a section of this blog you may find interesting and valuable – Where Conservatives Misstep.