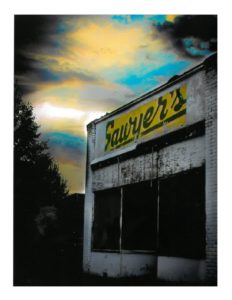 Show me where you grew up, she implored.  So I did.  Together, Renae and I packed our SUV and headed West in the dead of Winter, away from Colorado’s Front Range, toward Ogden, one day’s drive.  We sped along I-80, passing forlorn little towns with forlorn names like Green River and Rock Springs.

As the Winter sun receded, our path jogged around Park City and down Parley’s Canyon, then into Salt Lake City’s business district.  There, we took a hotel near the Mormon temple.  I grew up Mormon, less than an hour’s drive from this spot.

California’s Governor Leland Stanford drove the commemorative Golden Spike at Utah’s Promontory Point in 1869.  What previously had been a schooner journey around the tip of Argentina, overnight became a rail journey of less than four-days, from San Francisco’s Bay area all the way to New York City.  From that moment, my home town of Ogden emerged as a transcontinental rail hub.

Buss, as our family called our dad, was a Union Pacific brakeman and part-time shop keeper, although Sawyer’s Variety Store never amounted to much prior to its shuttering in my senior year of high school.  Not many years later, Ogden’s rail anchor began to falter also.  No more passenger service.  And there was diminishing need for Ogden’s rail yards since many freight trains bypassed it to connect directly through SLC.

Ogden was always different from SLC though.  In its heyday, transcontinental railroading made Ogden unique; a commercial and cultural center servicing itinerant rail cars, sometimes harboring contraband including Prohibition-era whisky.

Can I see your ID? asked the officious 60-something desk clerk at SLC’s Little America Hotel.  Of course.  We produced Colorado driver’s licenses and credit cards issued to different  surnames at different addresses.

Next, after assigning a room, she noticed and commented on our matching wedding bands.  Nice rings you’re wearing, she muttered.  What an unusual comment, Renae later mused.  By then our room had been assigned and there was no going back.  It’s location?   In a renovated back corner of what used to be Covey’s Motor Inn during the 1960’s.  Renae humorously dubbed this sparsely lit corridor the hotel’s “harlot corner.”

I’m an early riser and depart at daybreak for coffee and a workout.  Upon returning, Renae recounted a tale of someone’s unwelcome sexual experience filtering vicariously into our room.  Was it an actual Utah dalliance, she humorously wondered.

Humor aside, one cannot visit Utah without encountering the in-your-face assertion of Nineteenth Century sex roles and mores.  Among these, Salt Lake Tribune reporter Becky Jacobs describes various discontinuities faced by Utah women.  On the plus side, Utah became an early adopter—the 17th state to ratify the Constitutional amendment granting women the right to vote, even ahead of neighboring California.

But on the minus side, vexing discontinuities abound.  Amongst the fifty states it is virtually dead last, behind only Louisiana, with America’s largest gender pay gap.  Jacobs also describes how low wages and inflexible gender roles imposed by Utah’s ubiquitous Mormon culture turn the heads of outsiders.  For instance, Utah women report rigid cultural sex roles to be amongst the greatest challenges they face, Jacobs observes.