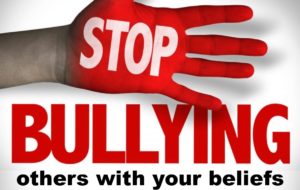 Our world is changing, making it crucial to “own” publicly when one doesn’t know objectively, but merely thinks they know, subjectively.  For contemporary Americans who post on the Internet, this comes down to public courage to say they “believe” but “don’t know” when one is a believer and not a knower.

In the Trump era of disinformation and other pseudo-realities, the careful distinction between knowledge and belief has special applicability for ultra-conservatives.  In a recent Princeton experiment, ultra-conservatives passed to others phony narratives at a rate almost seven times higher than the norm.

Private experiences, often religious in nature, are not necessarily valid publicly and should not drive policy formation.  Ethically, public policy must serve all Americans regardless of belief.

Twentieth-Century philosopher of science Karl Popper proposed a very bright line between objective public knowledge and subjective private belief.  According to Popper, a bona fide knowledge proposition must be capable of being invalidated.  That is, it must be able to withstand objective, science-type inquiry.  Otherwise, in the public square it should not be described as a proposition of knowledge, but one of belief instead.

One example of a proposition of belief is the assertion “God lives.”  Other belief-oriented propositions backed by ultra-conservatives include denial of natural selection (evolution) and denial of human-caused climate change (global warming).

Adam Smith’s vision of a self-regulating economy is a special, interesting case of the knowledge vs. belief morass.  It is connected to the belief of Eighteenth-Century physical scientist Isaac Newton.  Early in the Twentieth Century, Albert Einstein demonstrated that Newton-like order in the physical world is a special case, not the norm.  Indeed, many aspects of the natural order are fraught with randomness.

Unfortunately, the economics profession has been less than forthright in comparison with the physics profession in specifying the limits of applicability of Newton’s orderliness vision.

Right-leaning economists rely subtly on the orderliness vision to execute take-downs of economic policy-making, consistent with their religiously-held beliefs about how they think the world ought to work.  They do this in part to denigrate government policy-making and government intervention in the economy.

Often in economics and elsewhere this comes across as cyber-bullying by ultra-conservatives.  At https://stopbullying.gov Americans are admonished against negative, false or mean-spirited postings against individuals and groups.

Cyber-bullying also applies to aggressive, negative communication styles used to undermine objective knowledge with subjective beliefs about how one thinks as opposed to known aspects of how the world actually works.

There is an implicit special message at stopbullying.gov for followers of Donald Trump who take their lead from him by advocating, supporting, sharing and even producing fake news and “alternative facts.”  It is this:  The propagation of fake news and alternative facts undermines democratic values.  It undermines sacredness of the very experience of being American.

Statements in the paragraph above of course are drawn from the writer’s beliefs.