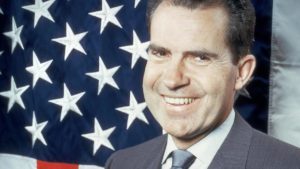 Well, that’s not exactly what President Nixon said, but close.  The quote was “I’m a Keynesian now.”

Previously Nixon favored less government intervention in the economy.  Now, if Nixon was around he would be branded by his own political party as socialist.  He’d gone so far as to propose a guaranteed minimum income for all.

During the Great Depression nine decades ago, English economist JM Keynes mapped a path back to normalcy through temporary government hiring of unemployed workers.  Once rehired, these folks spent more, pumping up demand for goods and services provided by the business community.

For conservatives, the name Keynes is synonymous with socialism.  Freaking out over Keynes or socialism is quite the same as freaking out over most any government-led economic leadership role.

If you haven’t seen it, take a look at government’s role in socialist Denmark.  This scares the bejabbers out of the same folks who pressed President Trump to repeal the Individual Mandate in Obamacare. Many argue the Mandate violates their liberty by forcing them to bear higher premiums to fund Obamacare folks with pre-existing conditions.

Using similar logic, it’s easy to draw a bright line of negativity around most any publicly funded program.  Why, some may ask, should they be forced to pay taxes to educate somebody else’s kids?

All the term “socialism” really means is this.  It’s a derisive catch-phrase used by opponents of taxation to fund public services for others. Often “others” are viewed as free-loaders.

So in the end, what do conservatives mean when they call someone “socialist?”  Merely, it’s less about the accused and more about the one making the accusation.

Links:
From The Nation: People in Denmark Are Much Happier Than People in the United States. Here’s Why.
View a sample module from CapitalisminCrisisdotOrg Module 29
View another Tip on socialism Tip 21
Love Your Enemies: Who is Arthur C. Brooks?