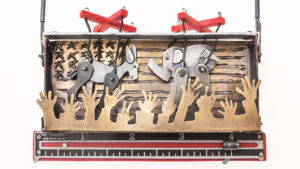 If you haven’t checked out a primo short on how socialism works, take a look at People in Denmark Are Much Happier Than People in the United States. Here’s Why.

Indeed, U.S. socialism may also be called American corporate capitalism as it is known to liberals.  Economists also know it as what’s called mixed capitalism; that is laissez-faire capitalism mixed with some Marxist perspectives.

So in the age of Donald Trump, why do American conservatives fear even socialism’s mention?  And why is socialism again becoming the attack dog for Trump’s Republican Party?

Backing slightly off the culture wars, socialism is today’s choice by Republican strategists, setting up their party for a win in 2020.  Who better to be made to serve as the “bad guy” than Representative Alexandria Ocasio-Cortez, young freshman feminist from New York’s liberal 14th Congressional District. Even her mention can stir the ire of right-wing voters who tend to be older and whiter than liberals; less educated and less urban, and so forth.

To ultra-conservative fear-mongers, America under liberal policies seems about to shift from the free-market indicative of two-plus centuries ago, to more highly taxed European models indicative of contemporary Denmark.

Is America about to become Marxist Venezuela? Is this a rational fear?

It is not. To see why it’s not, check out our next post (#24) on creeping socialism. Check out also, Capitalism in Crisis dot Org and other links, below.

capitalismincrisis.org
View a sample module from CapitalisminCrisisdotOrg Module 29
Love Your Enemies: Who is Arthur C. Brooks?  Do you think Brooks, a conservative, supports “socialism-baiting” by the Republican Party, discussed above?
People in Denmark Are Much Happier Than People in the United States. Here’s Why.