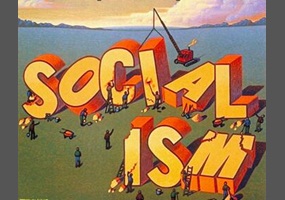 Now is the moment of the Creeps.
Who are they?  Where are they?

Maybe you get the creeps just listening to their nonsense.  If your politics are moderate to liberal, chances are that’s true.

Creeps are the follow-on to the “Chicken Little” people who peaked during Donald Trump’s 2016 presidential campaign.  Remember their sloganeering?  Did it sound to you like “the sky’s falling-the sky’s falling?”

Three years ago C-L’s fashioned themselves as passengers on ill-fated Flight 93 in likeness of the brave souls who rushed the cockpit on 9-11.  In their heart of hearts C-L’s believe, they are the only ones brave enough and truthful enough to save America from imminent liberal disaster.

Now C-L’s are back for a follow-on ballot box takeover.  Instead of a Chicken Little agenda, C-L’s have become fearsome opponents of what they decry as creeping socialism.

If you haven’t already checked out what Creeps revile against, take a look at a European example.  Check out People in Denmark Are Much Happier Than People in the United States. Here’s Why

Creeps get their nom de plume of course, from what they despise and fear.  They despise America’s abandonment of laissez-faire economic and social policies almost a century ago.  Then, our great-grandparents were refashioning our country into a more humane, more pragmatic nation.  Not so for authoritarian fundamentalists, however.  For them now, even social security and unemployment insurance are suspect.

Regarding socialism then, the truth is this.  Already, America is a socialist country, but not as dramatically as Denmark.  We’ve been headed this way since great-grandma was a school girl, even before the Second World War.

Indeed, American socialism represents constant search for the pragmatic political middle, perched along a continuum between progressive liberalism on one end and authoritarian fundamentalism on the other.  Another name for it is American corporate capitalism.  Even yet another name is what economists call it: mixed capitalism.  It’s some laissez-faire mixed with some Marxist perspectives.

In our next post we’ll look closely at some of the Creeps; the folks who scream socialism.  Included will be RNC Chair Ronna McDaniel and Senate Majority Leader Mitch McConnell.  Yet another will be America’s premier socialism-basher, Donald Trump.

But these are leaders, only.  America’s right-wing political problems rest not so much with leaders, but with their followers.  Without authoritarian followers, authoritarian fundamentalism cannot survive.

Our next post will be about followers.  Find it here soon under the title “Boiled Frog Socialism.”

Links:
Tune in today for our inaugural Facebook streaming at 12:30 PM EDT
Love Your Enemies: Who is Arthur C. Brooks?  Do you think Brooks, a conservative, supports “socialism-baiting” by the Republican Party, discussed above?
Read Tip 23: Who’s Scared of Socialism?