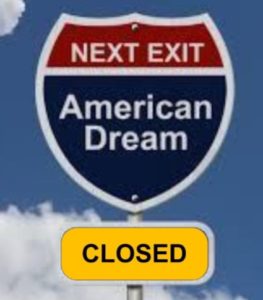 These words, from center-left Brookings scholar Richard Reeves.  Among experts, he’s far from alone regarding concern, even pessimism.

Do you remember the Great American Dream?  It used to be the notion that each generation would live better than any generation that had gone before.  But it now appears to be in intensive care.

How did we get here?  Actually, America was well down this angst-ridden path by the beginning of this century.  Then the Great Recession claimed nine million jobs starting in 2008.  With it came foreclosure of four million homes.  Household income dropped seven percent.  For African Americans especially, family net worth was almost sliced in half.

But to really see the full picture of capitalism’s travail, we must go back about two generations.  Workers’ income shares (compared to capitalists’ income shares) have fallen a full seven points in the 43 years prior to Donald Trump’s inauguration year.  Consequently, American working families must pony up evermore working hours, just to pay for necessities including housing.  Men especially are working less, earning less.  To illustrate, since Ronald Reagan’s election, the “real” wage of “middle” white male workers has fallen more than one percent.

Workers lack bargaining power, evermore.  Whatever material gains some achieve, success comes at the price of profound losses of sovereignty, says observer Elizabeth Anderson.  She decries modern CEO’s as totalitarians.  We imagine ourselves as being free says Anderson, but so often American workers barter away freedom to get a bit more pay.  In doing so, they hand over control of free time; indeed, control of their very lives.

Going forward Richard Reeves wonders, how will future historians determine the timing of capitalism’s crackup?  Will it be Lehman Brothers’ Wall Street failure amid the Great Recession’s darkest hours?  Or will the point of demarcation be traced eventually to the moment of the Occupy Wall Street protest movement in 2011?  Or perhaps, might historians demarcate capitalism’s ultimate crack up to the political ascendency of Donald Trump?

We’ll be looking closely at what caused capitalism’s problems, at the culprits who effectively handed over America’s sterling economic heritage, and at what can be done at this late hour.  How can we turn the tide before young Americans see nothing left of a once-great dream, except perhaps fond memories passed on from their grandparents.

Links:
Tune in on Facebook  to our podcast, Monday through Thursday at 12:30 PM Eastern time or anytime on: Anchor, Overcast, PocketCasts, Spotify, Google Podcasts, RadioPublic, and Breaker.
Richard Reeves article on Brookings