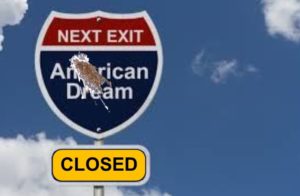 Richard Reeves of Brookings observes across 99 percent of human history, the belief that life gets better as kids mature would have been eccentric.

Not so since the era of Adam Smith however, when a more optimistic view came into prominence within societies adopting capitalism.

We work not just for ourselves but for our children also, says Reeves.  Often parents invest in the future by securing education for kids with hopes that enhanced skills will lead toward a better life.

Certainly it worked for a very long while.  Consider the so-called Greatest Generation.  Nine in ten Americans born in 1940 ended up richer than their parents.  Not so for those born four decades later, however.  Their number slipped from 90 percent to only 50 percent.

Intergenerational mobility is slowing for two main reasons.  Sluggish economic growth is one.  The other is rising inequality.  This makes The Dream increasingly less attainable for many segments of the American population.

Only one in three parents now believe their kids will eventually become better off economically.

Our changing national mood matters, says Reeves.  If the future looks less bright, then we should expect decreasing enthusiasm for sacrifices to obtain education, to start new businesses or to move away to start new jobs.

Now, this becomes the overarching political question as 2020 approaches.  It is a highly ideological one.  For Republicans, their proposed solution translates into increasing the rah-rah for unfettered free markets and diminished government economic roles.  Democrats on the other hand back more government leadership to get the American Dream back on track.  Conservatives label the Democratic approach as “socialism.”

We’ll be talking more about the nature of capitalism’s crisis and why a more hands-on approach…not hands off…makes sense.

If you’re moved by this debate about capitalism’s future, stay tuned.  Also check out the Brookings Institution, link below.

Tune in on Facebook  to our podcast, Monday through Thursday at 12:30 PM Eastern time or anytime on Anchor, Overcast, PocketCasts, Spotify, Google Podcasts, RadioPublic, and Breaker.