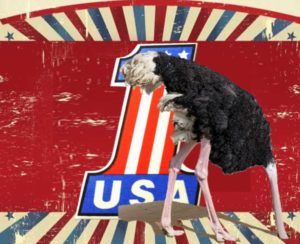 American Exceptionalism.  That’s the head-in-the-sand term used by Trump Republicans to justify Independence Day intransigence.  We’re an exceptional country they claim, because of their values; their stuff.  Because they say, America honors free markets and laissez-faire social policy.

Granted, our nation has been exceptional in many important ways.  But where are we now?  Has their claim become mere self-deception in the face of tarnished leadership and head-in-the-sand followership?

The New York Times asked these sorts of questions in a set of essays during the run up to Donald Trump’s July 4th celebration.  Watch Fox News response to what The Times said.

This is what drove Fox to such a reactionary posture.  Among other stats gleaned from OECD (United Nations), The Times bracketed how America has become number one among peer countries in gun ownership and mass shootings, prescription drug abuse and incarceration of prisoners.  We follow only China in damage inflicted to the environment.

America trails badly in other important categories.  We rank 27th in health outcomes due to fatter girths and shorter lives.  Regarding infant mortality, the United States ranks close to Russia.  In math and science education outcomes, our kids rank 30th and 19th respectively.  On child poverty we rank closer to Mexico than to Western Europe.

No wonder Fox News countered with a feel-good story on the eve of Donald Trump’s Independence Day assertion that America is becoming successful on his watch.  Tragically, this claim is a scam.

In the words of NYT foreign affairs columnist Thomas Friedman, the biggest threat to America is not our military enemies, but our very leadership and citizen followership.

Only we can ensure that the American dream — the core promise we’ve made to ourselves that each generation will do better than its parents — is not fulfilled, because we fail to adapt in this age of rapidly accelerating changes in technology, markets, climates, the workplace and education.

And that is nearly certain to happen if we don’t stop treating politics as entertainment, if we don’t get rid of a president who daily undermines truth and trust — the twin fuels needed to collaborate and adapt together — if we don’t prevent the far left from pulling the Democrats over a cliff with reckless ideas like erasing the criminal distinction between those who enter America legally and those who don’t….

The biggest threat to America is us. Read about some of the challenges Friedman says are coming to America head on, for which we are grossly unprepared.

Links:
The profound social cost of American exceptionalism
Why America is just OK
Why American Conservatism Failed by Fareed Zakaria

Podcast:
Tune in on Facebook  to our podcast, Monday through Thursday at 12:30 PM Eastern time or anytime on Anchor, Overcast, PocketCasts, Spotify, Google Podcasts, RadioPublic, and Breaker.