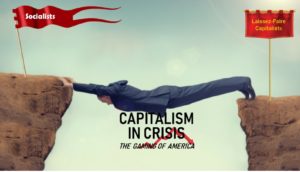 Really?  Only one or the other?  Just TWO choices, both extreme?

Yup.  Extreme ideologues on either side agree; there’s no middle.  Just laissez-faire on one far-side and Karl Marx-style socialism on the other.

To the contrary, at www.capitalismincrisis.org we spell out clearly how a vital middle is hiding in plain sight.  It’s a middle just waiting to be fleshed out, but first a path must be cleared through failed ideologies blocking the way.

How so?  First, discard economic rants from right-wing ultra-conservatives.  Many believe economic orderliness is the natural state of how the world should work; that natural law…God’s law…supports only laissez-faire.

In their schema, if you vote for proactive government including progressive taxation to pay for it, then you must delete yourself from the “capitalist” column and rebrand yourself as “socialist.”

Some wealthy people with left-leaning political philosophies also fall for take-the-money-and-run schemes.  When they do, business becomes all about pursuit of unvarnished self-interest vs. the pursuit of prudent self-interest, rightly understood.  Two centuries ago, Adam Smith would have rooted out these sorts of failed ethics.

Rather than to name-call moderates as socialists, this is what right-wingers should be doing to help solve the pseudo-capitalist problem.  They should be zeroing in on dysfunctional economic doctrines taught in America’s business schools, to MBA’s.

Such defunct doctrines justify people like Trump to run pretty much any pseudo-capitalist business, casinos included.  They believe one more dollar placed with a casino should receive the same high rate of return as one more dollar invested in say…a break-through medical technology treating a pandemic threat like Ebola, or worse.

MBA curriculums of the future should focus on the ethics of making goods and services rather than merely “making money,” as scholars including ethicist Adam Smith advocated long ago.  Refurbished b-school learnings should also include assessment of tax and regulatory penalties on shady schemes that stray over the line into pseudo-capitalism.

Module 30 Grandpa’s Conclusion, It’s (NOT) Impossible: In our last episode, Professor Robinson was reflecting on how to make capitalism great again…concluding…America must get its plow horse…too-long sidelined as a hobby horse…back into the field.

Module 29 Make Capitalism Great Again: Our trio exits the film…Night of the Living Dead … mumbling something about food cravings…zombie-style.

Module 27 Who Caused the Great Recession: This episode begins with Adam Smith placing a call to fellow zombie economist Jeremy Bentham…now residing in Truthiness City.  Bentham…wary of liberals…had accepted part-time work at the university there…

Podcast:
Tune in on Facebook  to our podcast, Monday through Thursday at 12:30 PM Eastern time or anytime on Anchor, Overcast, PocketCasts, Spotify, Google Podcasts, RadioPublic, and Breaker.