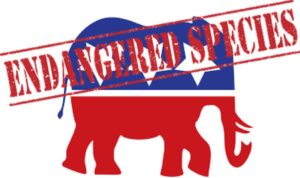 According to political scientists Steven Levitsky and Daniel Ziblatt, for a political party to accept losing and continue to support America’s political system as-is in the face of uncertainty about the party’s future, two conditions must hold.  One, its supporters must feel secure about losing today; that ruinous consequences will not be unleashed tomorrow; and two, they must believe there is a reasonable chance of winning again, down the road.

When these conditions do not hold, time shortens for losers, the authors observe.  Then they throw tomorrow to the wind and seek to win at any cost, now.  In short, desperation leads politicians to play dirty.

Why then does the Party of Trump feel losing in 2020 will bring ruinous consequences, with little chance of winning thereafter?  In other words, why are Republicans running scared?

For one thing, Republicans remain an overwhelmingly white Christian party in an increasingly diverse society.  As a share of the American electorate, the authors point out the cohort size of white Christians declined from 73 percent in 1992 to 57 percent of the population in 2012.  Further, their prior advantage may fall below 50 percent within five years.

Republicans also face a generational challenge: Younger voters are deserting them (https://www.pewresearch.org/fact-tank/2018/11/08/the-2018-midterm-vote-divisions-by-race-gender-education/).  Further, growing diversity within the American electorate is making it harder for their Party to win national majorities.  Levitsky and Ziblatt point out Republicans have won the popular vote in presidential elections just once in the last 30 years.

No wonder the ardent Republican base views impending defeat as catastrophic.   Consider the Flight 93 mentality.  For Donald Trump’s true-believers, he’s the Flight 93 President.

United Airlines Flight 93 was hijacked in the September 11 attacks. Terrorists crashed it into a field in Somerset County, Pennsylvania during an attempt by passengers and crew to regain control.

Two months prior to Trump’s 2016 election, the extreme right-wing Claremont Institute published this desperate call to action.  2016 had become the Flight 93 election, it claimed.  It exhorted true believers to “charge the cockpit” or they would die. You may die anyway, it concluded.  There are no guarantees except one, it claimed.  If you don’t try, death is certain.

Hordes of petulant white Christians and other Flight 93-ers are losing more than an electoral majority; their once-dominant status in American society is eroding.  Half a century ago, white Protestant men occupied most of our country’s high-status positions.  They made up nearly all the combined cohort of elected officials, business leaders and media figures. Those days are over of course, and the loss of social status for those following in their stead can feel deeply threatening.

Many rank-and-file Republicans believe the country they grew up in is being taken away from them.  Slogans like “take our country back” and “make America great again” reflect this sense of peril.

The only way out of this situation say the authors, is for the Republican Party to become more diverse.  Indeed, a stunning 90 percent of House Republicans are white men, even though white men constitute only one-third of the electorate.

Only when Republicans can compete seriously for younger, urban and nonwhite voters will their fear of losing — and of a multiracial America — subside, observe Levitsky and Ziblatt.  American democracy faces a Catch-22.  Republicans won’t abandon their white identity bunker strategy as long as there is hope of winning with it, but since their party’s bunker mentality has made them completely averse to losing, they are willing to bend the rules to avoid this fate.

There is no easy way out, observe the authors. Republican leaders must either stand up to their base as they broaden their appeal to include moderate voters, or suffer an electoral thrashing so severe that attracting moderates becomes a condition of survival, going forward.

As Levitsky and Ziblatt lament, the commitment of conservatives to play by historic rules of the American civic system is wavering.  Thus, our entire political system is made vulnerable to collapse due to their ideas and strategies.  Until Republicans may learn to compete fairly in a diverse society, America’s democratic institutions will continue in the face of peril.

Podcast:
Tune in on Facebook  to our podcast, Monday—Thursday at 12:30 PM Eastern time or anytime on Anchor, Overcast, PocketCasts, Spotify, Google Podcasts, RadioPublic, and Breaker.

Module 30 Grandpa’s Conclusion, It’s (NOT) Impossible: In our last episode, Professor Robinson was reflecting on how to make capitalism great again…concluding…America must get its plow horse…too-long sidelined as a hobby horse…back into the field.

Module 29 Make Capitalism Great Again: Our trio exits the film…Night of the Living Dead … mumbling something about food cravings…zombie-style.

Module 27 Who Caused the Great Recession: This episode begins with Adam Smith placing a call to fellow zombie economist Jeremy Bentham…now residing in Truthiness City.  Bentham…wary of liberals…had accepted part-time work at the university there…