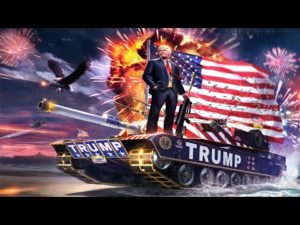 They’re protected by God and Guns. See what Blues need to know about the Republican “base” in Donald Trump’s world. Check out this plaintive, reactionary message from Christian country singer Josh Thompson.

Trump Republicans are scared. They’re afraid of economic failure and afraid of societal change.  They’re afraid of losing their way of life; afraid of what the future may bring to their unsustainable lifestyles. They respond with bravado and defiance. Some may even wonder. Metaphorically, might it be better to secure the ramparts, then pour down the equivalent of boiling oil on the heads of marauding libs who scale their inner sanctuaries? Said another: We just cling to our religion and our guns.

Failure and turning inward were not prominent cultural messages a half-century ago, however. Who remembers the happy lives chronicled in 1950’s sitcom reruns “Father Knows Best” and “Leave it to Beaver?”

Rather than accepting economic reality, then heading to community colleges for retraining followed by moves out of rural America and into high-demand jobs, Reds tend instead to resist and persist. Why give up their cherished way of life, they ask? Why become small Red fishes in the big Blue ponds of urban America?

True believers among them cling to Flight 93 “do or die” narratives. Politically, they line up behind Donald Trump as he charges the metaphoric cockpit door on Flight 93 in their behalf.

Even with Trump’s backing, the mid-range economic and political road ahead is bleak. Still, adherents cling to their vision of winning, ultimately, given Christian narratives of so-called End Times. It is a vision depicted in the popular 1990’s Christian novel series “Left Behind,” or the “Way Out Here” lyrics of Josh Thompson. Moderates and liberals may find these narratives useful in order to better understand the shrinking, reactionary world of white evangelical Christendom.

Elizabeth Bruenig of The Washington Post writes extensively about evangelical America. Even amid practiced piety, its leaders furtively assess five decades of failed attempts to positively influence popular culture. Not so with Donald Trump, however. Nationally prominent Pastor Robert Jeffress reflected with Bruenig about his faction’s morally controversial decision to hitch its wagon to Trump’s star, adding Donald Trump’s favorite biblical verse is “an eye for an eye and a tooth for a tooth.”

Even with Trump pulling them up by their bootstraps, Jeffress acknowledges the political trajectory of Christian evangelicalism is headed downhill until the vaunted Second Coming of Jesus of Nazareth.  Until then, evangelicals hold out little hope for a reversal of their declining fortunes in so far as popular American culture is concerned. What Trump offers them now, then, is a chance to pause and regroup as they await Jesus’s return.

Bruenig concludes. Trump is influencing their movement just as it enters its twilight days, with members adorned in pent-up anger and despair. Then she reflects. Its curious evangelicals seem willing to dispense with any hint of personal Christian virtue in order to embrace the morally flawed Donald Trump. Instead, they seem willing to embrace “whatever it takes” to win with him, which they perceive as crucial, just to survive as they believe, until their life choices become vindicated by divine intervention.

Podcast: Tune in on Facebook  to our podcast, Monday—Thursday at 12:30 PM Eastern time or anytime on Anchor, Overcast, PocketCasts, Spotify, Google Podcasts, RadioPublic, and Breaker.

Links to check out