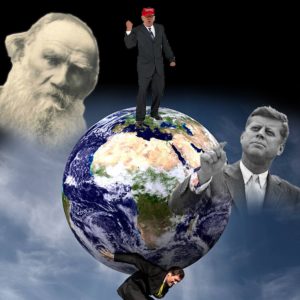 Amid the culture wars, some from the political right pluck a Leo Tolstoy quote out of context, then use it to express disdain for government. “I sit on a man’s back,” said Tolstoy, “choking him and making him carry me, and yet assure myself and others that I am very sorry for him and wish to ease his lot by all possible means—except by getting off his back.” Is this a metaphor for antipathy toward the taxation and regulation functions of American government?

While a powerful image visually, Tolstoy doesn’t connect well with grievances borne by Donald Trump’s fans, so they move on in search of other rationales for wearing MAGA hats at raucous political rallies.

So, how about George Orwell, from his novel “1984”? Isn’t it Big Brother who picks the pockets of hapless citizens, then over-regulates them such as in this election season when many feel forced to wear a COVID-19 mask just to gain admission to the local grocery store?

There may be an even better image, however. Remember anti-tax crusader Grover Norquist?  During the run up to Mitt Romney’s 2012 presidential contest with Barack Obama, Norquist’s organization committed 95 percent of Congressional Republicans to a policy of “No New Taxes.”

Tax cuts, yes! New taxes; no, definitely no!  Said Norquist: “My goal is to cut government in half…to get it down to the size where we can drown it in the bathtub.” That’s a powerful, visual metaphor!

But “drown” government in the bathtub? For what reason? Among others, conservatives aren’t doing well economically. Most resent lackluster outcomes, then take out their shared sense of group humiliation on government, believing it to be a tool of liberal America.

But is government the culprit per se? Or for conservatives, does it stand in place of something else; dark economic outcomes, specifically?

Here’s a quick run-down on how conservatives are doing economically, vis-a-vis liberals.

Republican voting districts tend toward being rural and ex-urban with higher concentrations of older, whiter, less diverse and more male-dominant workers gravitating toward employment in traditional industries that now tend toward lackluster incomes. While voters with these characteristics control an increasing share of America’s political geography, they command a decreasing share of its prosperity. Republicans are concentrated in traditional jobs within non-dynamic industrial sectors including agriculture, mining and manufacturing.

Americans who tend toward voting “Blue” on the other hand, dominate professional and digital jobs in which increasing worker productivity drives strong income growth. By contrast, Red America is characterized by sluggish productivity improvement and sluggish income growth.

Household income in Blue Congressional districts shot up 13 percent in the ten-year period following the Great Recession’s start. In Red districts however, household income actually declined about 4 percent during the same period.

Also by 2018, the share of total Gross Domestic Product created in congressional districts held by Democrats reached 64 percent, vs. 36 percent in Republican-held districts. That’s almost a two-thirds to one-third split!

As expected, Americans hailing from Blue districts are more diverse and strikingly better educated. Bachelor’s degree attainment between 2008 and 2018 rose 25 percent. Not so for Red districts where college attainment barely budged.

I wonder.  How might Tolstoy weigh in on the comparative politics of economic grievance? Or Orwell? Or Norquist? Or how about the very contemporary Thomas Friedman (see below)?

So there you have it; an essential “take” on why conservatives are angry at government. They see it as a surrogate for, and a “game” in which they don’t compete favorably, and they feel humiliated. But there’s more. In our next Carpe Diem post, we’ll look at ideological failures growing out of the conventional economic paradigm…both on the Red side of the political aisle, as well as on the Blue.

Check out Thomas L. Friedman and his path-breaking New York Times piece on the politics of humiliation:

Here is a link to the blog section on The Role of Government.