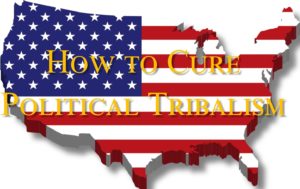 Opinion columnist Thomas Friedman laments a recent comment from a friend.  What’s going on in America today, observes the retired Marine colonel, is far more grave than any external threat, including the Soviet Union.  And this, says the friend, is because the threat we face is here and now, right at home, and coming from within us.  Friedman’s friend concludes:  I guess the irony of being a great nation is the only power that can bring you down is yourself.

When a majority of Americans from center-left and center-right come together, he says, tribalism can be ended if voters choose only lawmakers with courage to demand a halt—now, right now.

According to Friedman’s view, tribalism is fueled when the most powerful messages are sparked, not from the middle, but from one extreme or the other.  Tribalism’s defeat becomes possible, only when centrists stand down from pursuit of win-at-all-cost strategies.  Defeat is possible only when message control is powerful and prompt.  Defeat is at hand when both sides direct outrage not at one another, but at wing-nuts who occupy extreme ends of the political spectrum.

Union and community organizer Jane McAlevey offers a similar recipe.  Unions, she says, know what it’s like to be pummeled repeatedly by destructive tribal-like forces.  They know what it’s like to be crushed by deep pockets that sustain negative messaging campaigns.  They know about hired guns who enable chicanery; those sharp shooters supplied by union avoidance firms who use any means at their disposal to stymie workers from organizing to win higher wages and better working conditions.

In recent years the method of these sharp shooters has leaked out of labor relations, then become snapped up as the new fuel of tribal politics.  In response to what is happening in political arenas, McAlevey’s method draws upon her labor background.  Overall, she is on the same page as Thomas Friedman.  To win at political warfare, McAlevey observes, negative messaging by opponents must be defeated.  So also must defeat be extended to messages conveying a sense of futility for even attempting to participate in industrial democracy.

When futility and lies are wrapped inside Newt-Gingrich style tribalism he introduced to Congress four decades ago, there can be no stepping back.  Any loss becomes a win to the other side, she observes.

So then, how does one message from the left, but compromise toward the center?  First, she says, build a durable majority.  Forget wishful thinking about winning on super thin election margins of a percent or two, only.  Instead, build the super majority needed to prevail on election day.  Make it  a very large cushion, she admonishes, because as the election nears, many more voters will succumb to hired gun messaging, including the unbearable sense of futility conveyed to those considering making a stand against tribal initiatives.

Assume ten percent of voters succumb, or worse, then go for a super-majority of at least 60 percent.  Better yet, says McAlevey, go for seventy-five percent, then use it to cushion against any last minute, democracy-busting onslaughts opponents may unleash.

Go for a super-majority to stop fraud, and rigging and gaming schemes, and on and on.  Use a huge majority to build a stewardship vision for today, of the world we want for those who will be coming behind us, tomorrow.

According to Capitalism in Crisis Dot Org, win in order to make capitalism great again by getting America’s plow horse, too often sidelined as a hobby horse, back into the field as productive and hard-working.  Do it to coalesce a vision that draws the line on Donald Trump-style pseudo-capitalist schemes.  Do it, most of all, to align the pursuit of self-interest with attainment of the common good.