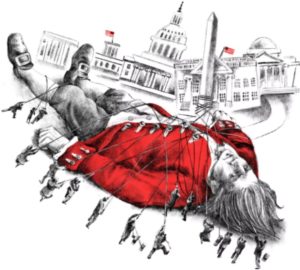 America is stuck.  We’re tied down by partisan ideology.

Our situation is not unlike Gulliver.  We’ve become like the giant, fallen asleep and then awakened by mini-people dancing on our collective selves, making outrageous demands.

The strings controlling Gulliver are not unlike the strings of tribal partisanship.  While the pragmatic majority slumbers, America’s forward path remains hobbled by extremists dedicated to the proposition that no price is too high to defeat their enemy.

On the extreme right, Gulliver’s captors number as few as one in sixteen among us.  More in Common describes them as Devoted Conservatives.  They harbor deeply held core beliefs.  They evangelize traditional values.  They mobilize to hobble government.

Meanwhile, the pragmatic majority is repelled by tribalism fatigue.

According to More in Common, the costs include unrealistic pressures on many personal relationships.  They even include fragilization of our very democracy.

But that’s not all.  Tribalism also weakens the effectiveness of American-style capitalism.

Imagine laissez-faire juxtaposed against Marxism, with only scorched earth-tribalism between. In such a dysfunctional environment, how can capitalism be healed?  How can the real economic swamp be drained; the swamp of corruption, wealth-hoarding, fraud, rigging and gaming schemes and the like?

More in Common calls Americans to reflect on how to get out of this self-imposed exile.  Perhaps our path is not unlike the path Gulliver must pursue to free himself from domination.

Reaching the exhausted middle may be the key to countering polarization.  Traditional liberals and moderates instinctively support compromise.  So also do those in the exhausted middle.  But how can these folks be brought into America’s political conversation more dynamically?  More hopefully?