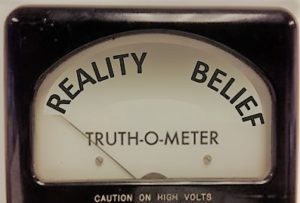 I’m no fan of deceased opinion writer Charles Krauthammer.  Imagine my surprise then, at a Washington Post column written by his son.  According to Danial, the father was enlightened on a crucial point.

Charles Krauthammer championed “real” and distinguished it from what it is not.  He drew a bright line between the known and the merely believed.

Crucially, Krauthammer understood how attempts by political advocates to elevate belief to the status of knowledge pose huge risks for democracy.  Surely he lamented the disabling undercurrents of fake news and false realities, cast recently upon America’s public life.

Here we’ll use mid-twentieth Century philosopher Karl Popper as guide, consistent with Krauthammer’s perspective.  According to Popper, a bona fide knowledge proposition must be capable of being invalidated.  If not, then ethically it must be represented instead as a proposition of belief.

Illustrations?  Consider “the cat is on the mat.”  Potentially the proposition is capable of elevation to the status of knowledge because it can be invalidated (falsified) objectively.  Another name is the scientific method.

Suppose we observe the cat entering the room and sitting on the mat.  If the cat fails to do so however, then the proposition fails.

Even though propositions of belief can’t be falsified, they may be important.  For instance “God lives” is both impossible to invalidate and enormously important within America’s public life.

Similarly, “All men are created equal” is not knowledge, but belief; it’s a self-evident article of faith. Such articles also go under the heading of America’s Civic Religion.

So, what to make of this?  Here’s one important conclusion.

Quasi-religious American political identities are leading to tribal confrontations across the so-called culture wars.  Even though positions may be held self-righteously however, authoritarian pronouncements can never produce known reality out of mere belief.