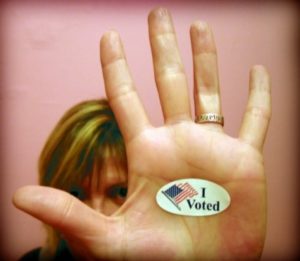 The ink is still drying on pundit assessments about the 2018 midterms.  College-educated suburban women especially, are abandoning the Republican Party.  To illustrate, Democrats now control all four House seats in California’s previously conservative Orange County.  So one wonders.  With monumental Republican losses in the suburbs, what comes next for the Party of Lincoln?

Will Donald Trump-style culture warfare meld into something less brazen?  If so, what might revised  Republican messaging be, aimed at winning back college-educated suburban women?

Watch for a new wave of socialism-bashing from the Party of Trump.

Consider Karl Rove’s post-election comments in The Wall Street Journal.  This quintessential Republican strategist is rallying troops around the alleged horrors of socialism.

How to stop a socialist resurgence?  Speak to the baser instincts saluting the unmitigated pursuit of self-interest, versus self-interest rightly understood.  Scare.  Convince voters in suburban districts their economic interests are maligned by an ever-more-bloated federal bureaucracy.  Convince them also, a socialist takeover is imminent.

Bernie Sanders surely heads Rove’s enemies list, although Sanders is politically independent,  not a Democrat.  Whatever.  Talk up Bernie’s budget-busting ideas such  as free college and student debt reduction.  Talk up perceived flaws in single payor health insurance proposals.  Talk up perceived evils of anything smacking of federal government-led leadership.

How have voters responded when Republicans dusted off this tired rhetoric, previously?  According to Public Religion Research Institute (PRRI), Americans are divided about what socialism is and what it does.

Democrats say it’s about providing citizens with services (61% vs. 43%).  Republicans, however say it’s about government control trumping private enterprise and personal freedom (54% vs. 36%).

Then what is socialism, really?  Here are some underpinnings.

Adam Smith gave the world laissez-faire in the Eighteenth Century.  Karl Marx countered with socialism in the Nineteenth.  Since these two exist at extreme ends of America’s ideological spectrum, one wonders why there is a dearth of thoughtful options growing out of the ideological middle.  To make matters worse, the American economics profession has contributed precious little to helping voters unpack middle-range ideological options, unaligned politically with either extreme.

One direct way to assess positions on the extreme right and the extreme left is to examine ideological perspectives regarding economic value creation.   For Smithian purists, value is created solely by entrepreneurs.  For Marxist devotees on the flip side, value is created by workers; the actual producers of goods and services.

We could pursue these further of course, but we won’t.  Already there is everything needed to scope out three possible Democratic Party responses to the imminent wave of Republican messaging about socialism’s alleged evils.  Note also; pushing repeatedly on the “socialism fear button” goes hand in hand with denigrating taxation to pay for public services and public leadership.  Ergo, expect Republican messaging to continue casting aspersion on proactive federal policy-making.

Of three possibilities, Number One looks like this: Duck. Take the light approach, again.  Argue some government is necessary to the smooth workings of our complex social economy.  Stand on a rational world view.  Oppose scare tactics designed to marshal Red-leaning followers with fears of inefficiency, loss of freedom of choice, or takeover by faceless Washington bureaucrats, aka government professionals.

This liberal defense hasn’t work well previously, however.  It’s not strong enough to reach around personal attachments many hold on the political right, to the unfettered pursuit of unmitigated self-interest.

Possibility Number Two: Stand and defend.  Laissez-faire ideologues deal not so much in fact, but in belief.  But believing is not knowing.  Point this out.

Ideologues do not know objectively, but merely believe subjectively.  Why are right-wingers vociferous in unquestioned defense of an 18th Century ideological system of belief?  How can they be sure, if their religiously held vision becomes adopted, the economy will magically become more efficient, more just, even more merciful?

So next we dwell on Possibility Three, calling boldly for Democrats to occupy vital new policy and ideological ground.  Since it requires more ink, it will be the singular focus of our next Tip, Number 15.  Please check it out here, next Friday.