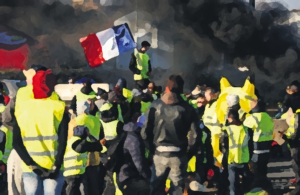 Pay attention to France’s yellow vest movement and also the future of President Emmanuel Macron.  If he fails, the end of a politically united Europe could be in the offing says syndicated columnist Thomas Friedman.

What also could this mean for Donald Trump’s America?  Continuing meltdowns across Europe could portent even greater populist disruptions on America’s shores.

In prior Tips we’ve argued Democrats should defend boldly against a coming wave of “socialism-bashing” launched by populism-focused Reds, against Blues.  Indeed, the best defense against these Republican scare tactics may be no defense at all.

Why not accept the opposition’s ideologically-driven rhetoric as inevitable?  Why not name it as political baiting, then live boldly out of a better path forward, into America’s future?

Anyway, what is socialism?  Amid smears from the right, one wonders if the provision of practically all public goods could be re-messaged for their political base as socialism; even public education could be so-named.

Why pay taxes they may ask, to educate someone else’s kid?  Such rhetoric has long-lured Trump-type voters.  Farther out the freeway, many avoid paying their fair share for the public services they consume.

In a prior Tip we observed:

“Perhaps those who leave the suburbs for exurbia see themselves as the smart ones.  Why should they pay for more than they use?   Why not drive toward the metro area to get whatever they need, from their homes farther out the freeway?  Isn’t it savvy just to pay for whatever one wants?

Why shoulder costs of building and maintaining highways, they may ask?  Why pay into tax-funded schemes to create and maintain airports, hospitals, universities, criminal justice and welfare systems and the like?”

But this truth alone misses another glaring one.  Many in the migration to exurbia are not motivated by ideology, primarily.  Like France’s yellow vests, traditional American workers are driven by a changing economy often hostile to their interests; one that uproots the once-stable lives of their previously middle-class families.

Traditional skills in the labor market are losing ground to technology and globalism.  Traditional workers are being downsized by robotics, artificial intelligence and low-cost Asian imports.

Many formerly middle-class workers harbor burning resentments.  In France, many have been downsized from central cities to the outskirts where previously they relied upon excellent public transit systems.  Now these yellow vests must commute long distances by auto, even to get to less desirable jobs in distant workplaces.

Most recently however, comes a new wave of French laws and taxes designed by Macron to jump-start the economy including a new tax on fuel.  For many Frenchmen, these actions are the last straws.  Amid anger and humiliation over sinking wages, rising rents and now-escalating commuting costs, they have donned yellow vests and pushed back politically against their President.  Why they ask, should they bear the brunt of these autocratically implemented changes?  “President Macron,” they cry, “Can you hear us now?”

As Thomas Friedman observes, the challenge on both sides of the Atlantic requires a delicate balancing act.  How can society find space to move forward, but without leaving behind economically, these workers and their families?

Here at home, what may be required to defeat dysfunctional aspects of right-wing populist ideology and to replace it with consensus support instead, for self-interested acts that sustain the common good only?  Indeed, all of us should be asking in these perilous times, “How can American society come together in shared willingness and shared sacrifice to pay taxes to educate someone else’s kids?”