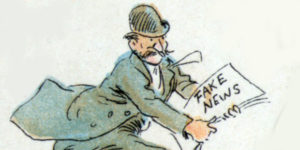 America is stuck.  We’re tied down by partisan ideology.  Fake news is a huge part of America’s paralysis.

A Princeton University study finds that ultra-conservatives and many senior citizens “push” fake news at alarming rates, compared with the general population.

Only 1 person in 12 shared bogus information during the 2016 survey year including Donald Trump’s election.  Right-wing conservatives and like-minded seniors however, earned a dubious distinction of passing on phony narratives at a rate almost seven times higher than the norm.  Not so for political liberals, however.

Study co-author Joshua Tucker thinks seniors may not distinguish truth from lies, easily.  They lag in information technology and social media skills, as a group.

People who call themselves “very conservative” shared the most fake information.  They pushed misinformation 6.7 times more often than political moderates.

According to Harvard public policy professor Matthew Baum, politically based fake news-sharing is “less about beliefs in the facts…than about signaling one’s partisan identity,” the Associate Press reports.  That’s why efforts to police fake news hiding on the Internet, doesn’t really change attitudes, he said.

In an email Baum described these Americans as politically extreme.  They take their lead from President Trump who “advocates, supports, shares and produces fake news on a regular basis.”

The Associated Press also quotes MIT researcher Deb Roy, former Twitter chief media scientist.  Roy says the problem stems from what has become the underlying nature of American news.  It’s full of “my way or the hi-way narratives” as many viewers seek out stories with which they agree, while simultaneously labeling stories with which they don’t, as fake.

In a previous post we observed America’s narrative-fueled culture wars are not unlike the story of Gulliver.  Arguably we’ve become like the giant fallen asleep, and then awakened by mini-people dancing on our collective selves, making outrageous demands.  These tiny Lilliputians are not moderates.  Instead, they’re ultra-conservatives, pulling hard on the strings of tribal partisanship.  Indeed, they’re dedicated to the proposition that no price is too high to defeat their cultural enemies.

According to the research organization More in Common, ultra-conservatives represent as few as one in sixteen Americans. None-the-less they often “govern” by packing Republican primaries in conservative voting districts to win election victories for their hand-picked candidates.

In doing so they hobble government, which is an aim.  All the while, the pragmatic majority is repelled by “tribalism fatigue” ultra-conservatives impose upon the whole.  According to More in Common, the costs of their political strategies include damage to American civic virtue and to countless personal and family relationships.  Apparently no price is too high, making right-wing political victories worth even the most draconian costs, imposed by them upon other Americans.

Now pressing questions rise to the surface of these Capitalismincrisis.org commentaries.  How might political, religious and cultural attitudes of ultra-conservatives be described?  What are common beliefs?  How do these connect with strategies designed by them to achieve dominance?

Because at its heart this is an economic blog, we begin by mining common ultra-conservative beliefs standing in the way of constructive change; beliefs that fly in the face of how the real economic world actually works.

There is no better place to begin than two-plus centuries ago with the mythical influence on laissez-faire of physical scientist Isaac Newton.   In our next installment, we’ll look at origins of the economic doctrine of orderliness and how it subverts practical aspects of economic policy.