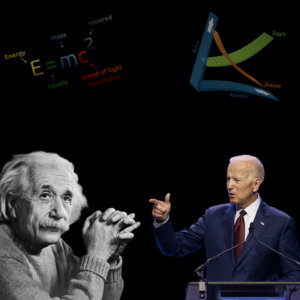 How might the presidential aspirations of Joe Biden benefit from Albert Einstein-type thinking? Well, Biden could adapt by thinking somewhat more “outside the box.” But that would be an understatement.

An illustration? Biden’s policy advisors could approach economic doctrine akin to the way in which Einstein approached Newtonian physics. He viewed Isaac Newton as brilliant, but also hemmed in by his underlying 18th Century view of orderliness; by visions of a world with too many “closed boxes.”

What if we relaxed the Newtonian concept of macroeconomic orderliness? How might an Einstein-type perspective look?

Are you listening, Joe Biden?