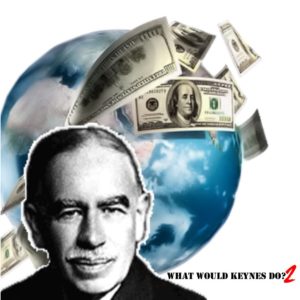 JM Keynes, the planet’s standout economist at mid-Twentieth Century, died prematurely in the year following World War II’s windup.  One wonders.  Is there a path toward understanding what Keynes might contribute now, if he happened to be living in our time?

There is.  Indeed, it’s hiding in plain sight, illuminated by the contribution of Twentieth-Century economist Joan Robinson, a student of Keynes at Cambridge University.  She observed a problem deep within capitalism that fails to distinguish the extra reward legitimate capitalists should receive, in comparison with something less—or not at all—flowing to riggers, gamers and scammers.  I call these businesses and their perpetrators, pseudo-capitalism.  President Donald Trump’s business career is a consummate illustration of some of these strategies.

Before digging into Joan Robinson’s insight about this profit void  she called a lacuna, we must dissect Keynes a bit.  Like Albert Einstein, he was a dynamic thinker, compared with the more static thinking of Eighteenth-Century physical scientist Isaac Newton.  In significant ways, classical physics served as a pattern for the development of laissez-faire economics.  Even now, many right-wing ideologues continue to proselytize laissez-faire perspectives.

In the Twentieth Century, Einstein and Keynes qualified Newton’s “orderliness“ contributions in these ways.  For Einstein, orderliness largely disappears, outside of our solar system and beneath the level of the molecule.  Randomness arises as a better explainer and predictor of esoteric physical phenomena.

For Keynes, economic orderliness disappears when market equilibrium is thrown into disarray, which occurred during the Great Depression.  Keynes observed the bubble economy of the 1920’s and the ensuing economic crash.  Somewhat analogous with Einstein’s approach in physics, he argued that the government’s policy response must qualify the Newtonian perception of ever-present equilibrium, then follow strategies to remedy disorderliness, until economic equilibrium once again returns.

Then, depression-era laissez-faire ideologues appealed for government forbearance.   Equilibrium would return in the “long run,” they assured.  Their predictions were hollow, however.  Keynes chortled in response, that in the long run we shall all be dead.  What he meant is this.  Market disorderliness may extend indefinitely.  To regain equilibrium in the 1930’s, government assumed a new economic role: to assist households to achieve what they couldn’t achieve without assistance.  During the Great Depression’s nadir during the Winter of 1933, Franklin Roosevelt began his presidency by shuttering failed banks, then reopening healthy ones, and then hiring massive numbers of unemployed workers.  His actions broke hoarding behaviors, eventually.  Full employment equilibrium returned, eventually.

Mainstream economists summarize JM Keynes’ contribution this way.  He repealed Say’s Law.  In actuality however, it was a hypothesis associated with Say, and no law at all.  The actions of businesses, as they create supplies of goods and services he observed, simultaneously generate income streams enabling households to purchase all that workers produce.  It cannot be defended empirically.  It is static rather than dynamic.  It does not account for periods in which quantities supplied are at variance with quantities demanded.

What if America’s economy is now experiencing a “slow blow” contemporary shock equivalent to the Great Depression?  How could  the wisdom of JM Keynes and Joan Robinson address this evolving crisis, boldly?

The first step is to understand and then to stop hoarding.  During the Great Depression, wealth was being hoarded by the households of workers in the form of gold-backed money.  Almost one century later however, wealth is being hoarded by an elite class of pseudo-capitalists.  Rather than deploying wealth productively, it is used instead to build up wealth hoards in real estate, finance, objects de art, and a host of other nonproductive schemes, hobbling productivity within the “real” economy.

How then shall contemporary hoarding be stopped?  How shall the wisdom of JM Keynes be applied to stop riggers, gamers and scammers?  During the Great Depression, the solution was to stop the hoarding of gold-backed money, and then to create massive numbers of jobs through public programs.

Now, a completely unique hoarding problem calls politicians and policy makers to face head on, its completely unique manifestations.  One huge problem is this.  Our universities aren’t meeting this contemporary challenge by emphasizing how to spot disequilibrium hoarding and how to identify and resolve the ethical dilemmas posed by pseudo-capitalism.

CAPITALISM IN CRISIS: A KEYNESIAN RESPONSE

Under President Joe Biden, America must create a roadblock to business schemes perpetrated by pseudo-capitalists.  Legitimate capitalism, illustrated in the business strategies of ethical leaders including Tesla’s Elon Musk and Omaha’s Warren Buffet, must receive ever-stronger, evermore decisive “green” lights. Rigging, gaming and scamming schemes on the other hand, must be blocked by bold “red” responses.

Relying upon the wisdom of Keynes, how shall this be accomplished, specifically?  I’ll lay out a roadmap in my next carpe diem post.  Please stay tuned!