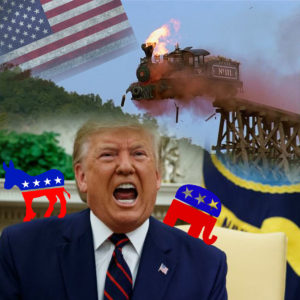 Without a dramatic change of course, America is well down the road to blowing apart, according to NY Times columnist Thomas Friedman. He describes a time-worn path that no longer works when we need it most; one that could lead away from the brink of mayhem by extending economic and social mobility through supporting diversity and expanding access and inclusivity. Getting there requires political compromise and lots of it, however. In America, that’s become a very scarce commodity.

Indeed, political compromise is fast being replaced with intransigence. Donald Trump’s politics are Exhibit One. Says Friedman: We can’t do anything big or hard—or together—anymore. Case in point: America’s hobbled capacity to mount a really viable response to Covid-19. Beyond Trump’s obvious intent to take down what he calls the Deep State (read: rule of law), what is the Republican endgame?

Why is our country running off the rails? Democratic Party politics play some role, but Friedman identifies a much deeper wellspring of dysfunction. Look to the Tea Party Wing of Republicanism, ongoing since Barak Obama’s administration, he admonishes as he draws upon insights from Frank Fukuyama. Under Donald Trump, last decade’s dark momentum has segued into a form of right-wing nationalism in which consequential decisions have become really deadlocked, Fukuyama observes.

So, how does this impact American capitalism? No! No! Never! is poised to become a potentially insurmountable barrier to reform as essential repairs escalate to extraordinary levels, defying back burner-status.

If America could “rise above” to mount necessary change, what are essential repairs capitalism requires? That’s up next.