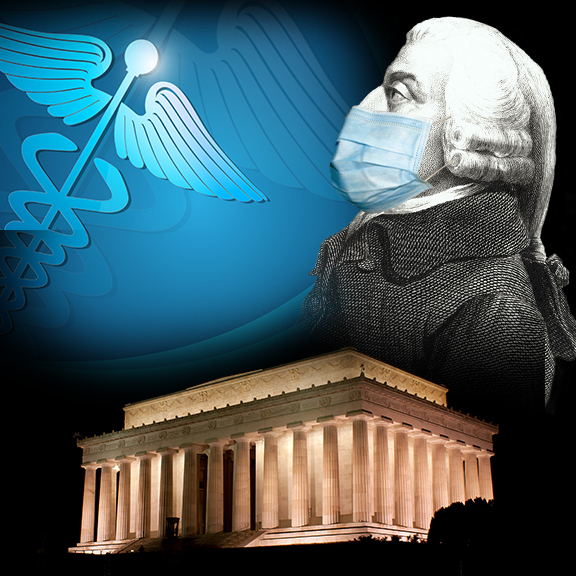 Absolutely. Adam Smith would wear a mask to protect others. He would respect and hold others’ needs on par with his own. He would expect them to do likewise.

Smith did not endorse the pursuit of unbridled self-interest. Instead, he embraced self-interest, rightly understood. He was a moral philosopher; an ethicist. Smithian capitalism works when entrepreneurs view themselves not merely as libertarians, but as communitarians; as conservators and enablers of the community’s greatest good.

The title of Adam Smith’s 1759 book—Theory of Moral Sentiments—makes this point abundantly. As our First Economist, he recommended what he called the Faculty of Sympathy. Accordingly, everyone should place themselves in someone else’s shoes. Each should be willing and capable of assessing the circumstances of “the other,” then responding to those circumstances as though they were one’s own.

We ask then: How could the political tribalism of Donald Trump’s followers be more at odds with Adam Smith’s vision? How may someone espouse moral capitalism, then stand in opposition to sound public health strategies by refusing to protect others with the wearing of a mask?

Indeed, there is no path of reconciliation between these mutually exclusive points of view. It is not ethically feasible to flaunt Covid-19 public health guidelines while simultaneously espousing the goals of Smithian capitalism.

On this point Adam Smith would pronounce libertarians and other right-wing political tribalists as out of step with the Enlightenment-era humanism he espoused; out-of-step with service and honor to contemporary American community. Adam Smith would call these people out for muddling essentials of civic duty with crass assertions that somehow mask-wearing assaults their sense of liberty as they perceive it.

Ironically, their afront to public health connects directly to America’s pseudo-capitalist problem of rigging, gaming and other dysfunctional financial schemes. To solve pseudo-capitalism or to solve Covid-19, community consensus and cooperation is required. Each calls for adoption of Smith’s faculty of sympathy. Each requires understanding how anchoring the well-being of others simultaneously contributes to one’s own well-being. Each requires libertarians to alight from their high-horse of partisan pretense and join forces across all aspects of community to secure the common good.

The future we want must be teased out of a complex world with many wants and far too few resources. So long as America allows itself to be blown apart by government-hating contempt for rational, democratic process to secure the present and the future, we won’t be able to do anything big or hard—or together, including solving Covid-19.

Regarding reform possibilities then, the Trumpian mantra of “No, No, Never” creates an insurmountable barrier. Strident opposition to mask-wearing compromises public health, and it also compromises America’s capitalist future and those who will live in it: our kids and everyone else’s kids. In this moment, all Americans should be willing to abandon pretentious ideology and don a Covid-19 mask for the greater public good.